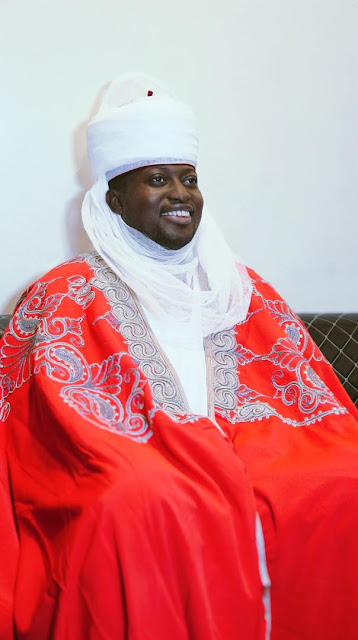 Hon. Dayo Israel, the National Youth Leader of the APC, has been honoured with a title in Zamfara state by the Magajin Gurin Gusau, Alh. Dr. Halliru Muhammad Magajin, who named him the Tauraru Sabon Gari which translates to the ‘Star of Sabon Gari’ and is an honour reserved for individuals who have distinguished themselves in a field.

Israel was turbanned by the district head of Sabon Gari in Gusau on Thursday at his palace in the Zamfara state capital during a ceremony witnessed by other district heads, youth stakeholders, government representatives among other notable figures.

Alh. Halliru Magaji attributed Israel’s selection for the rare honour to his rejuvenation of youth leadership in politics, noting that since his emergence as the leader of the youth wing of the country’s ruling party, he has both facilitated a greater appreciation of youth-centred issues by the country’s leadership and also spurred the serious participation of more youths in politics and governance.

The Magaji also praised his efforts to strengthen the country’s unity, particularly through outreaches to other regions of the country, including the north, with his widely commended nationwide youth mobilization and energizing tour for the election of Bola Ahmed Tinubu in 2023.

On his part, Israel thanked the traditional ruler for the gesture which he claimed had buoyed his “joyful feeling of acceptance by the region.”

He said, “This honour is not just mine alone, it is also shared by my father and political mentor, Asiwaju Bola Ahmed Tinubu, whose leadership and personal example showed the precious importance of preserving the country’s unity and how to bring about lasting change and development through the serious application of self to national objectives.”

He also seized the opportunity to encourage the citizens of the state to stick with the APC as their preferred party at the polls next year because of the party’s continued dedication to the cause of peace, safety, and development.

“My tour across Nigeria and the north, in particular, has opened my eyes to the real-life impact of the progress we have made since 2015. It has also brought me face-t0-face with the remaining hurdles we must cross together as a nation. Our party is one with Nigerians. We are neither detached nor out of ideas. Asiwaju Bola Ahmed Tinubu is a known builder and performer. For a continuous march forward, I urge you all to please support him to be president, similar to other APC candidates on the ballot in Zamfara State.”

Dayo Israel arrived in Zamfara on Tuesday to continue his youth engagement and mobilization exercise across the nation. His title as the ‘Star of Sabon Gari’ adds to his growing list of honorary titles bestowed on him by respected and influential traditional rulers of the northern region. Before now, he was turbanned as the Wakilin Matasa of Tunga in Awe LGA of Nasarawa State.