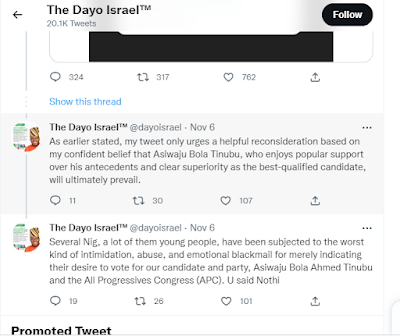 The attempts to misconstrue my tweet asserting Asiwaju Bola Ahmed Tinubu’s victory, based on his nationwide acceptance by most Nigerians, is despicable.

Well-known alarmists whose stock in trade lies in creating needless controversies in order to remain relevant have desperately sought to suggest that by urging the acceptance of what is soon to be a democratic reality, I am somehow guilty of denying others the right to their own electoral choice. Nothing could be further from the truth.

In fact, the tweet was in part a rebuke of self-important elements like this who arrogate to themselves the power to dictate to other Nigerians who they must vote and how they must express their partisan support.

Several Nigerians, a lot of them young people, have been subjected to the worst kind of intimidation, abuse, and emotional blackmail for merely indicating their desire to vote for our candidate and party, Asiwaju Bola Ahmed Tinubu and the All Progressives Congress (APC).

Some of these vicious attacks have been led by those who now pretend to care about the right of every citizen to freely make an electoral choice, devoid of abuse and any form of coercion. In their conceit, they have, without basis, moralized their own partisan bias, insisting that only those who share that bias qualify as good Nigerians and should be allowed a say.

Their hypocrisy prevents them from acknowledging that sanctimonious actions like this, in the arena of politics which is defined by divergent interests, are what constitute grave dangers to our democracy and social harmony.

They have embraced a willful denial of the obvious fact that they constitute a tiny minority and that the very rules of democracy, which awards electoral victory to candidates with the most number of votes, means that they must live with the coming reality of a Tinubu administration, given that their attempts to intimidate millions of other Nigerians out of their choice of Asiwaju and the APC will be met with a resounding failure.

As earlier stated, my tweet only urges a helpful reconsideration based on my confident belief that Asiwaju Bola Tinubu, who enjoys popular support over his antecedents and clear superiority as the best-qualified candidate, will ultimately prevail.

Nigerians have decided on Bola Tinubu because he has demonstrated an unmatched capacity for leadership. The evidence is clear. His reform of government processes and agencies, and partnership with the private sector, to conceive and guide the birth of a mega-city.

His mentorship of leaders who represent the brightest minds in public service today. From Tunde Fashola to Babajide Sanwoolu, Tinubu’s distinguished status as the country’s most impactful political actor, at the forefront of the country’s most successful governance achievements since 1999 is without question. Go and verify!

You will vote, just as other Nigerians. The results and eventual outcome will honour the wish of the majority of Nigerians, not any one individual or group no matter how loud their voice or how toxic their campaign. That is the beauty of democracy. It rewards consensus and punishes divisiveness. We will prevail and Nigeria will be better for it.