The award was presented by Online Reporters Association of Nigeria (ORAN) executives to the Bank's Corporate & Brand Communication Heads on Wednesday 25th May 2022, in Akin Adesola, Victoria Island, Lagos State. 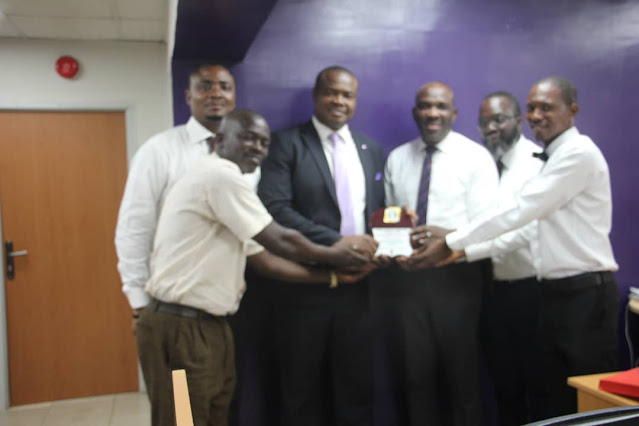 On behalf of the Online Reporters Association of Nigeria ORAN, the executive trio of Shehu Tijani Adegbola; President, Alfred Abiodun; Public Relations Officer (PRO), and Richard Igbolaju; Secretary-General, paid Polaris Bank a working visit at its Akin Adesola, Victoria Island Corporate Headquarters, to formally present the exceptional financial institution with the award it had won as "The Human Resource Bank of The Year" during the media organization's anniversary.

They reiterated ORAN's commitment to the media growth and positive image projection of the banking giant as a sacrosanct duty which would always be given top priority in the Association's plans.

While receiving the award on behalf of the Bank. Mr. Nduneche Ezurike expressed the Management's delight at being accorded due recognition and also thanked ORAN for being an emerging force to be reckoned with in the online media space. He acknowledged the apparent positive evolution of the dynamic media group and its preparedness to impact the media world in unprecedented proportions.

For a Bank that rose from the ashes of another like the mythical phoenix in 2018, with little odds of survival slammed on the new merger like an odious label. Polaris Bank, under Tokunbo Abiru and now Innocent C. Ike managed to re-invent the brand to become a Bank of the future.

Polaris Bank emerged bigger and stronger, proving all the projections of its pundits’ wrong within its first year of operation, such that an online publication in 2019 by Nike Popoola went on to say that: “Polaris Bank Limited recorded N27.8bn profit before tax in its first audited IFRS 2019-compliant financial result.

“The result showed that Polaris Bank’s capital adequacy ratio of 14 per cent and liquidity ratio of 81 per cent were well above regulatory requirements, demonstrating strong prudential compliance…”

Due to the Covid-19 pandemic in 2020, few people could assume leadership of any business organisation and make profit.

Fewer still could successfully manage the change of leadership so seamlessly for a Bank with a long history of turmoil, after the first MD/CEO left in such a short time as did Innocent Ike, Managing Director/Chief Executive Officer, Polaris Bank.

In his words, “Polaris Bank has achieved significant milestones since its inception in September 21, 2018, when we started this journey. We have since grown to earn the confidence of the banking publics, offering quality banking services at the cutting edge of technology…2020 was arguably the most challenging year the world has faced in decades owing to the negative impact of COVID-19 on businesses and the economy.”

Polaris Bank in 2020 equally achieved profit growth of N28.9bn (PBT). However, the Bank attained other important milestones which will position it for greater growth in the future. These include:

The Bank increased its customers’ deposits by N56 billion, predominantly low-cost deposits in spite of difficult economic and industry conditions, and increased its gross loan book by N38 billion, reflecting the Bank’s modest and prudent risk strategy to grow its portfolio of quality loans for optimal interest income generation.

In 2022, Polaris Bank has been showing greater commitment to breaking all its previous records.

Recognized in 2021 by BusinessDay Newspapers as the Digital Bank of the Year (Global Award category) at the Banks And Other Financial Institutions (BAFI) award for its trailblazing delivery of VULTe Digital Bank. Just last week, Polaris Bank and the Lagos State Employment Trust Fund (LSETF) partnered to provide N1 billion fund to artisans operating in Lagos state.

Lagos State’s informal economy, under which artisans are categorized, is said to employ about 5.5 million people – about three-quarters of the State’s 7.5 million labour force – out of the country’s nearly 200 million people. This figure (5.5m in Lagos alone) represents over 80 percent of the population working in the informal sector, according to the International Monetary Fund (IMF). Despite its evident potential, the informal economy is often faced with difficulties, one of which is the lack of access to finance.