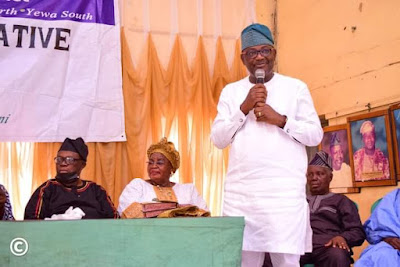 A Chieftain of the All Progressives Congress from Ogun State has praised the leadership of the party for successfully steering the just concluded national convention in the right direction.

The aspirant for Ogun West senatorial  seat spoke to newsmen on the sidelines of the APC National Convention held at the Eagles Square in Abuja on Saturday.

Isiaka alluded to the internal crisis within the party prior to the convention and said it was normal in democracy and party politics.

Speaking to journalists, he said, "What we witnessed before today were the usual bickering and horsetrading that is associated with sharing of party offices. Do not forget, this is a big party with many stakeholders; therefore everyone jostles to protect their interest".

"I am delighted that contrary to what the naysayers and prophets of doom predicted as the outcomes of this convention, the leaders rose up to the occasion by imbibing the spirit of give and take in many instances.

According to the three term gubernatorial candidate, "We have a medley of consensus and voting which reflects the diversity and crisis resolution mechanism of the party. This must be commended".

Isiaka called for further unity as the party faces the season of primaries stating that these processes will require more sacrifices from leaders and aspirants.

According to him, "The next eight weeks will be crucial as we face our primaries. I urge that we all should continue in this spirit to navigate that period so that we produce all aspirants without rancour and injury to the party".

The convention lasted lated till the early hours of Sunday producing Senator Abdullahi Adamu as the consensus National Chairman of the party.