Governor Obiano: In the Halo of History.By James Eze 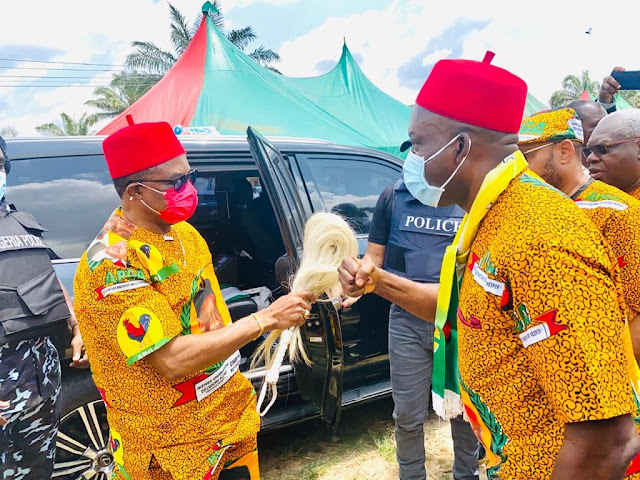 Receiving the flag that made him the standard bearer of APGA on Monday October 7, 2013, Chief Willie Obiano declared, “History will be kind to me for I intend to write it.”

He was quoting British war hero and famous statesman, Winston Churchill. He sought to bring clarity to the quote when he further declared once again “My fellow party faithful, friends and brothers, in accepting the flag of our great party today, I have chosen to write our history. And I will be kind to myself. I am bound to serve!”

Now in the final months of his eight year reign, Obiano is ending his stay in office on a historic note. In a country that has made the enthronement of mediocrity a bad habit, it is almost suicidal to strive for merit. But always mindful of history, Willie Obiano has risen beyond the pale of mediocrity to ensure that his successor is the best man for the job.

Anyone who has followed Nigeria’s political culture in the past twenty years would have noticed that it is considered a political blunder for a governor to allow a successor who stands a chance of eclipsing his performance. Apart from Bola Tinubu who allowed Babatunde Fashola succeed him; many former governors in the country fought had battles to ensure that only spineless candidates succeeded them. The unwritten rule was to install a wimp and ensure that they could still run the state while out of office. This calculation failed in some instances though. Some supposed puppets suddenly grew big balls after assuming power and threw all permutations to the bin.

But Governor Obiano bucked that trend when he rose above unbelievable obstacles to ensure that Soludo currently stands in line to take over from him. He fought long drawn and costly legal battles that took place virtually across Nigeria. Proxy wars are the most inelegant wars. The court battles were ostensibly a quest for internal democracy in APGA. But in reality, it was a brutal proxy war fuelled by an envious governor of a sister state in collusion with a flawed politician. Obiano had a real fight in his hands. He won the battle but lost the war. For the first time in a long while, APGA went to a decisive election with broken wings. Many members of the party who occupy crucial elective positions defected to the enemy party. His deputy decamped too in a plume of controversy. A virulent article on the eve of the election by the widow of the party’s iconic leader painted a picture of despair and failure for the party in the election.

Again, when you recall that less than a month earlier, his enemies had made an audacious attempt to impose a state of emergency on Anambra; when you remember that this same enemy had frustrated his effort to commission the famous Anambra International Passenger and Cargo Airport Umueri with a symbolic flight operation, you will understand the enormity of the forces arrayed against Obiano. They had reckoned that allowing commercial flights to commence in Anambra only a week to the election would take the steam off the opposition and hand an easy victory to Soludo. But as it turned out, nothing could stand in the way of a determined people. Obiano’s bold resistance as shown in his swift trip to Aso Rock to fend off the impending state of emergency made all the difference.

It is important therefore, that as we salute the courage of the Anambra people for standing on the right side of history by voting Chukwuma Soludo to power, we do not lose sight of the sacrifices that produced that victory… that when the story is told about how a people stood their ground against intimidation and inducement to midwife the birth of merit in Nigeria’s political culture, we also remember that a less confident governor, plagued by insecurities and fear of being obscured by the dazzle of a brighter star would have stood in the way of the people’s hope.

But happily, Anambr State has found herself in a rare moment in history where both the people and their leaders are ready to make the required sacrifices for greatness. And so, for a state that produced the writer whose classic work Things Fall Apart spoke of how a society disintegrates if a warrior opts for war when his people had no heart, it is exhilarating to see that at this moment in time, Anambra is experiencing quite the opposite of what happened to Umuofia.

In Anambra State today, both Okonkwo and the warriors of Umuofia are battle ready. And Things have fallen Together for Anambra under Obiano!

And that is historic!