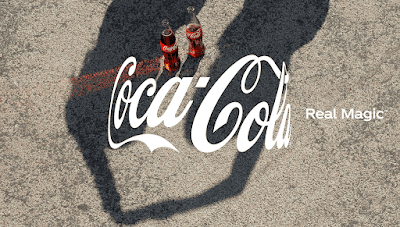 Brand Introduces Real Magic, Its First New Global Platform Since 2016 and reveals the “Hug,” a New Perspective on the Iconic Coca-Cola Logo

Coca-Cola today unveiled a new global brand philosophy and platform called Real Magic, which invites everyone to celebrate the real magic of humanity.

The platform refreshes the brand’s trademark promise – to unite and uplift people every day – with renewed relevance for the world we live in today. The platform is built from lessons of the last 18 months: that we can find the magic all around us when we come together in unexpected moments that elevate the everyday into the extraordinary. It also acknowledges the many contradictions experienced as new generations find harmony and human connection in a virtual and divided world.

“Real Magic is not necessarily a major departure from our messaging in the past. In fact, it still captures the essence of the Coca-Cola brand, whose long-term brand philosophy and belief encourages people to indulge in a sense of community, and to view life with a renewed sense of purpose”, says Alfred Olajide, Vice President and Managing Director, Coca-Cola Nigeria.

“Through the Real Magic campaign, we seek to have a fresh perspective on the quotidian moments we typically dismiss or forget and highlight how these shared mundane experiences should be cherished”, he continued.

Real Magic marks the first new global brand platform for Coca-Cola since ‘Taste The Feeling’ in 2016 and is being launched alongside a refreshed visual identity for Coca-Cola, as well as a fresh iteration on the Coca-Cola logo that will feature across Coca-Cola marketing. Inspired by its representation on Coca-Cola’s iconic packaging, the “Hug” logo lifts the curved Coca-Cola trademark on the bottle and can labels to provide a visual signature that will embrace and frame moments of magic across Coca-Cola’s communications.

The campaign also features social and digital executions, as well as out-of-home activities, such as a star-studded launch event in Nigeria this October, featuring the country’s biggest on-air personalities, artists, footballers, influencers and more. As a part of the campaign, Coca-Cola will also implement consumer engagement activities, with a view to rewarding fans and consumers.

“Coca-Cola is a brand defined by dichotomies: humble but iconic, authentic yet secret, real yet magical”, said Manolo Arroyo, Chief Marketing Officer for The Coca-Cola Company.  “The Real Magic philosophy is rooted in the belief that dichotomies can make the world a more interesting place – a world of extraordinary people, unexpected opportunities and wonderful moments. At the same time, it captures the essence of Coca-Cola itself: a real taste that is indescribable, unique, a touch of real magic”.