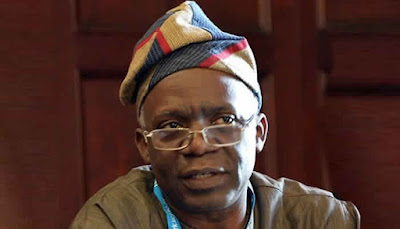 Falana stated this on Monday during the Fela Debates symposium themed ‘The National Question: Evolution or Devolution?’ held in Alausa, Ikeja.

He said, “Fela sang about ‘Sorrow, Tears and Blood,’ which spoke about torture by the police and the military. It was not until 2017 when the Anti-Torture Act was enacted by the National Assembly. Under that law, a police officer who tortures anybody shall be prosecuted and the penalty is 25 years in prison. We must thank Fela for that.

“Under the 1963 constitution, the government was not liable for any atrocity it committed against the Kuti family. However, that is no longer the rule. Under section six of the 1999 constitution, the government, whether federal, state and local, can be brought to book and taken to court. I want us to realise that these are reforms instigated by Fela and other forces in Nigeria.”

Also, a lawyer and activist, Dele Farotimi, who spoke at the event, faulted the Nigerian structure and said the country can not evolve or devolve.

“Evolution is a natural process of emergence while devolution speaks to the decentralisation of power and delegating power to lower authorities. These two things are incongruous when it comes to Nigeria because Nigeria is not an evolutionary phenomenon; it is a product of an amorous relationship between the British and their several mistresses in the place called Nigeria and they were all lumped together. You don’t talk about devolution when a country has been stitched together on very clear terms one of which is the division of power between the Federal Government and the regions,” he noted.

An educationist and politician, Mrs Arinola Oloko, said, “Citizenship involves participation. We know the 1999 constitution does not recognise women as it should and that is what we have been fighting for, that the constitution should recognise us – women, youths and people living with disabilities. We the citizens all have to be deliberate and not believe things will just change with a magic wand.”

The Secretary-General of the Lower Niger Congress, Tony Nnadi, said, “Let us rule out devolution because you are taking from where there is the power to give to the constituent elements, but in a federation, it is the constituent units that donate the power that goes to the centre. To think that the federal would give this to states or geopolitical zones is to misunderstand what we are discussing here. The revolution that is the solution of the problem is only taken from the perspective of evolution.”

The afrobeat singer, Seun Kuti, said, “What Nigeria needs is a revolution – but not the mainstream definition of it. I believe that revolution is ideology in action, not just because you are angry. Nigeria is a manifestation of our collective consciousness, not about evolution or devolution. If you like, devolve power to the poorest man that has been suffering all his life, he would use his past suffering to justify making other people suffer.”