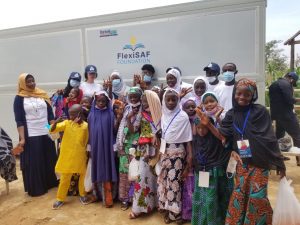 Flexisaf Foundation on Tuesday said  it carried out an accelerated learning project for three years  to tackle the issue of out-of-school children in Rugga Community, in Wuye District Abuja.

Executive Director Flexisaf, Amina Abubakar said this at the Flexisaf Pre-Transition Event to wrap up its Accelersted learning Project to transit beneficiaries to formal schools.

According to Abubakar, the accelerated learning Project is an innovative model of the foundation and it works by creating safe spaces in target communities and employing instructors to teach beneficiaries of the project.

She said  that the foundation provided education to indigent children through mobile schooling to reduce the number of out-of-school children under ages eight to 11 to learn the basics of education before enrolling in formal education.

“The selected out-of-school children in the community are then classified into classes according to their age and metal capacity.

“They are taught from a robust curriculum that embodies teaching like, numeracy, life skills, jolly phonics and computational thinking, then they will be transited into formal education.

“`The foundation will not just stop at transiting the children to formal schooling systems, but it will continually monitor their progress and also provide every necessary materials and items for their effective takeoff.

Co-Founder of the foundation, Ahmad Salihjo, expressed joy at the success of the event adding that he was glad the children could speak English and compose themselves .

Salihjo said that he would work out ways to ensure that the school and some neighboring houses were provided with solar home systems to power the classrooms.

Mr Hamzat Lawal ,CEO ,CODE ,represented by Mr Mukhtar Modibbo ,Community Engagement Offiecr ,CODE ,common said that though CODE had worked in other communities but it did not know that a community like Rugga existed in the FCT.

Lawal said that CODE’s  partnership  Flexisaf to help tackle out-of -school children in Rugga community paid off because the children improved in learning.

Onisimus said that recently,  the curriculum for accelerated education was developed and  submitted to the federal ministry of education .

He added that Flexisaf would be invited to give field their field experience as Plan International meets with stakeholders and the  European union  to develop  a guideline for the implementation of  accelerated education.

The representative from Universal Basic Education Commission(UBEC), Iliyasu Hussaini ,principal ,Quality Assistance Officer UBEC said that the commission was saddled  with the responsibility  to ensure that all school age children were in school.

Hussaini said that the Federal Government obtained a  611 millions dollars grant through the  World Bank  to bring out-of-school children back to school  under the Better Education Service Delivery for All (BESDA).

Hussaini said that the commission was happy with what Flexisafe did in Rugga adding that a report would be taken to the Executive secretary of the commission about the establishment of a formal school to enable the children continue their education .

Programme Officer,  Flexisaf Foundation  ,Egbunu Nelson, said that the  accelerated learning project was  a project focused on speed and quality so the   three years early age curriculum was compressed into 12 months.

Nelson said that when the foundation came to the community three years ago,most of the children could not read no write and some could not even hold pens but the case was now different .

” We use the Montessorti approach to teach, so it is easier for them to now blend letter sounds to form words and with that ,they are enabled to read and  ready to be  transitioned into formal schools,” he said.

The Head of the community ,Mai Unguwa Rugga, Adamu Ahmadu, thanked the foundation to helping children in the community to learn .

Ahmadu, therefore, called on the government to help provide formal schools for the community so children could further their education and not be left behind for the benefit  of the community and the nation at large .

The News Agency of Nigeria (NAN) reports that alarmed by the accelerating number of out-of-school children in Nigeria, Flexisaf Foundation , CODE and other partners  came together to identify out-of- school children and provided  quality basic education for them.(NAN)