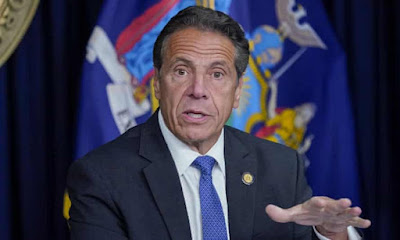 New York Gov. Andrew Cuomo on Tuesday said he would resign effective in two weeks because of a sexual harassment scandal that has crippled his administration.

The announcement of his resignation came in a live stream from his Manhattan office minutes after his lawyer during her own statement to reporters again flatly denied claims that he had sexually harassed anyone during the Democrat’s three terms in office.

Cuomo’s resignation, however, comes a week after a report issued by the state Attorney General’s office found he had sexually harassed current and former staffers, along with a state police trooper assigned to his protective detail, and women outside of government.

Cuomo said he had to resign because he did not want to distract the state from important work to be done.

He said he was motivated to step down to avoid months of distraction for the state, which is continuing to deal with the COVID-19 pandemic, from an all-but-certain impeachment of him over allegations he sexually harassed at least 11 women.

“Given the circumstances, the best way I can help now is if I step aside and let government get back to government.

While continuing to deny some of the more serious claims against him, Cuomo conceded he had offended some of his accusers with what he considered friendly or incidental physical contact and comments that were normal for men of his generation.

“In my mind, I have never crossed the line with anyone,” he said. “But I didn’t realise the extent to which the line has been redrawn.

“Thank you for letting me serve you. It has been the honour of a lifetime,” Cuomo said.

The White House while reacting to the announcement that Cuomo will resign in 14 days stated that it was what President Biden had advocated for.

Biden had on Aug 4 at a White Press Conference called for the resignation of Cuomo after an investigation found that he had sexually harassed 11 women.

When asked if the governor should be impeached, Biden said, “Let’s take one thing at a time here.“

“I think he should resign. I understand that the state legislature may decide to impeach, I don’t know that for a fact. I haven’t read all that data,” the president said.

“The president made clear his views last week and those stands. Our view is that this is a story about these courageous women who came forward, told their stories, shared their stories.

“And the investigation overseen by the attorney general that, of course, completed today in an outcome that the president called for just last week,” Psaki told reporters at the Tuesday briefing.

Psaki said Biden has not talked to Cuomo and there are “no plans that I’m aware of” to speak with him.

Psaki said that Biden has “not yet” spoken with Lt. Gov. Kathy Hochul, who will become New York’s first female governor when Cuomo’s resignation takes effect.