Lager Beer And The Battle For Survival For Guinness Harp ……..As NB and SABMiller Goes Regional 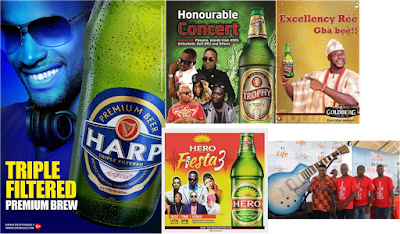 Nigerians love their beer, and it’s estimated that Nigerians consume close to 18 million Hectolitres of beer every year, coming second only to South Africa.

With the Western beer consumption slowing down due to global downturn reverse is the case in Nigeria as it’s actually pretty common sight to see beer parlours/joints where people go to drink and relax in most neighborhoods irrespective of their social status.
Indeed, studies show that with the largest population in Africa, a growing middle class and a large number of drinking-age consumers, the brewing multinationals may be jockeying for positions in a market that shows plenty of room for expansion.
With the amount of pressure on consumer spending given the uncertainties in the economy, higher cost of living and security challenges which have all led to the drag in the volume growth among major players in the sector, Nigeria’s beer market is still rated among the 10 fastest growing beer markets in the world, with market share of 1.9 percent, which is slightly close to the Indian beer market which stands at 3.2 percent and occupies the seventh place in the global ranking.
However, the last two years have witnessed a huge competition among notable lager beer brands in Nigeria.
Noticeably; it is no longer a two horse race between Nigerian Breweries and Guinness with SABMiller entry few years ago, as consumers no longer determine quality of beer with cheap price.
The competition is becoming intense every single day; consumers and beer enthusiasts are thrilled by series of campaigns aimed to attract their buying consciousness. Concerts, sponsorship of traditional festivals, partnership with football associations, massive marketing campaigns in the mass media, among others are some of the ways brewery companies are using to deepen their consumer engagement but today reality is that brand custodians are struggling to reach skeptical audiences that have become largely bored by traditional brand communications.
According to Jeremy Bullmore , consumers now build a perception or an image of the brand just exactly the same way birds build nests from scraps and straw which they chance upon unlike  Guinness Harp lager beer whose attempts to exert and enforce control of its brand have been noted to have backfired as consumers themselves have actually become important brand-builders.
Brands have come to realize that every region has their preferred taste and needs, as consumers now choose what they want themselves.

More so that SABMiller have succeeded in introducing quality and affordable beer in Nigeria which have made NB Plc to acquire some regional breweries to compete on the affordable beer segment  without hunt for its  supposed premium brands(Star ,Gulder ,Heineken)  with its Goldeberg,”33”,Life brands while little or  nothing seeing from Guinness Harp.

For instance, the southwest market dominated by Yorubas, both SABMiller and NB company’s strategy is tailored to capture the Yoruba speaking people; Trophy and its ‘Hononourable’ campaign have given Nigerian Breweries’ Goldberg a fight for its money. Goldberg in response to the competition launched ‘His Excellency’ campaign.

In eastern Nigeria, dominated by Igbos, one of the three biggest ethnic groups in the country with population over 40 million, SABMiller’s Hero lager is popularly called “Oh Mpa” or “Oh Father”. The name given to the brand in memory of late Chukwuemka Odumegwu-Ojukwu, Biafran leader, tagged ‘the Hero of the Igbos’ for setting up an independent nation of Biafra in the 1960s.
The Hero Lager bottle bears the rising sun that appeared on the Biafran flag and that resonate with the Igbo people. NB Plc responded with Life Continental Beer which is all about the progress of the people of the South East According to the Brand Marketing Manager, Mr. Agu,”This is evident through our ongoing project – Life Progress Booster. Music is important to the Igbo people, especially highlife music and with highlife legends like Osita Osadebe,Celestine Ukwu,Oliver De Coque and many other.

These regional brands have within a short time become a force to be reckoned with and they have found their ways into the heart of consumers as the brands now become the preferred brand in the region which makes it difficult for Harp lager to continue it nationwide market penetration.

Although, at a point Guinness Nigeria introduced Dubic beer to wade-off cheap competition for its Harp lager, also incidentally Harp former Brand Manager, Emmanuel Agu now call the shots as Portfolio Manager –Mainstream Lager(Goldberg,Life,33& More) and Stout(Legend, Williams, Turbo King & others) at Nigerian Breweries Plc  - where did Guinness Nigeria Plc have it wrong? At what point did Harp begin to lose its loyalist, with major consumers pledging loyalty to other different brands within their region.

One wonders if Guinness, maker of Harp Lager might consider any change in strategy as the popular saying goes “change or die”.

Mogaji ‘Tunde, is a marketing communications practitioner with expertise in experiential marketing and media relations services, he can be reached at olatunde.mogaji@gmail.com or 08056145926