Promasidor Nigeria Limited, makers of Cowbell Milk, has launched Onga cubes into the Nigerian seasoning market, following a successful penetration of Onga powder which was introduced into the market in 2004.

Speaking at the launch of the new product in Lagos on Thursday, Kachi Onubogu, Executive Director, Commercial of Promasidor said, “after almost two years of insightful and innovative work by the Promasidor team, I am happy to welcome Onga Cube into the Promasidor Nigeria family of brands.”

He noted that the new Onga Cube would come in singles of four grams, and in two variants of Onga Cube, which could be used for any type of dish while Onga Chicken, which is a special blend, with superior chicken flavour that could be used to create excitement in the kitchen.
He said the new cube would be packaged 50 cubes in a pouch and 24 pouches in a carton, adding that Onga in cubes is a completely different formulation from the existing Onga powder because we did a complete reformulation from scratch, paying particular attention to what the consumers want in an ideal brand of seasoning cube. 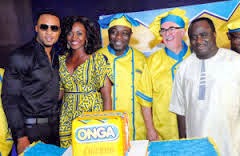 Onubogu noted that with Onga cube, their promise to consumers are superiority in terms of product delivery in preparing different dishes, varieties and options to choose from and ultimately impress them with their cooking while they will continue to be a responsible company to the general public with a core marketing culture, strong belief in consumer need and ultimately delivering to the consumer need.

Onga was launched in an innovative format, in powder for ease of usage and better aroma, ten years ago.

The launch of the Onga brand has changed the seasoning category by not just offering consumer varieties and convenience, but fundamentally offering taste and aroma.