We Will Continue To Sensitize The Public About The Achievements Of Our Party,APC.........Hon. Ladejobi Shuaib 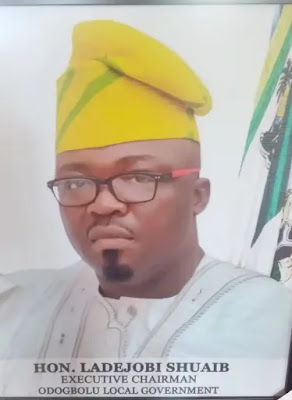 Hon. Ladejobi Shuaib Coordinator Fìtílà Movement who also doubles as the Executive Chairman, Odogbolu Local Government stated, As a group, fìtílà movement have continuously been sensitizing the people of the activities and achievements of our great party both at the state and national level and we chose to endorse all APC candidates from the presidency to the state House of Assembly because of our believe in good governance for all which is being exhibited by our governor, Prince Dapo Abiodun and our confidence that the APC presidential candidate, Bola Tinubu, will improve the economy and guarantee local government autonomy, if elected in 2023.

Mr. Mogaji Tunde, the spokesperson for Fìtílà Movement said,  “The implementation of Governor Dapo Abiodun ISEYA agenda in the past 31/2 years of his administration and his all-inclusiveness governance have earned him an almost no opponent contest in Ogun state which directly gives all other APC candidates in the state a smooth ride to winning all the elective office in the 2023 general election and we would continue to clamor and work for a Asiwaju Bola Ahmed Tinubu Presidency because of his track record as a Governor of Lagos. The impacts can't be denied or ignored because the template is still very much in use and the successes of Lagos is open for all to see. We are ready and prepared to deliver and support our party for us to continue to enjoy more dividends of democracy in Odogbolu local government, Ogun State and Nigeria at large”.

While rolling out reasons why people of Ogun State especially Odogbolu Local Government residents have to vote APC candidates, Hon. Olajide Dada, the Monitoring and Evaluation Director Fìtílà Movement stated that all APC candidates have track records of achievement that speaks for them. For instance, our amiable governor Prince Dapo Abiodun have continuously  spread dividend of democracy to almost all the wards in Odogbolu Local Government,from road constructions, Ijebu ode- Epe road,Ibefun-Itokin-Ikorodu road,Ilesan-Ijebu Ijesha -Ago-Iwoye road,etc; renovation of Public Health Centers, Built and Renovated several public schools both primary and secondary, upgrading of college of education to University Of Education, Science and Technology and several welfare programs that has continued to better the life of our people in Odogbolu Local Government.

Hon. Olajide Dada further said, Former Governor of Ogun State, Otunba Gbenga Daniel (OGD), who is also the All-Progressives Congress candidate for Ogun East Senatorial District, whose developmental strides at the grassroots level when he served as governor for two terms, were capable of endearing him to the electorate which will attract viable and people-oriented projects to every part of Ogun East towards improving the lot of teeming residents, when elected.

Hon. Olajide went on to Barr. Femi Ogunbanwo fondly referred to as Omo-Iwa,an immediate former commissioner for special duties and Inter-governmental Affairs coupled with his experience at National Assembly as Special Assistant/Chief Legislative Assistant to Senator Tokunbo Afikuyomi between 1999-2007 where he assisted the Alliance for Democracy (AD) and Lagos State Government in many political programmes and activities. When elected he will be actively involved in the processes leading to good representation and facilitating grassroot development to the people of Odogbolu local government.

Additionally. ”Hon. Atinuke Bello has not disappointed the people of Odogbolu Local Government with quality representation at State House of Assembly with various bills like increment of females in Ogun State Cabinet, House Fund Management bill, among others bills of state benefits. Aside our legislative activities, she has empowered many groups, youths and widows in the local government and also facilitated through the National Assembly legislators (Senator Lekan Mustapha and Hon. Kolade Osunsanya) many projects like renovations of schools, public health’s, construction of new 40beds public health center, among others”,Hon Olajide concludes

Fìtílà Movement spokesperson, Tunde Mogaji further said that the group has a committee that will embark on a house-to-house campaign until the day of the election and also being a youth group will be collaborating with APC National Youth Leader, Hon. Dayo Israel who have being reaching out to the most populous voting class (youths and women), sensitizing and educating them on citizens right and giving election education.