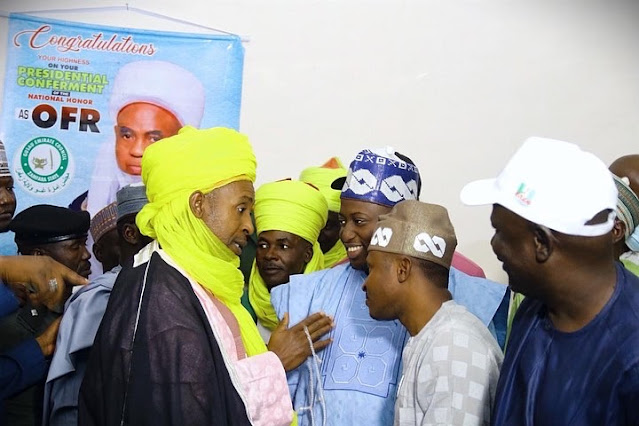 APC National Youth Leader, Hon. Dayo Israel, has charged youths and citizens of Zamfara to maintain the party’s incumbent status in the state and central government by backing its presidential and governorship candidates in the 2023 general elections for continous progress in the war against terror and to facilitate greater economic growth.

Israel said this while addressing the crowd at the One Million Youth March staged in Gusau, Zamfara state capital, on Wednesday to mobilize support, particularly amongst the youths, for Governor Bello Matawalle who is seeking another term in office.

In his address, Israel highlighted the successes of the APC government in the key areas of security and economy, noting that Governor Matawalle, otherwise known has ‘Dodo’, had worked hard to combat the banditry challenge which previously led to the occurence of daily killings and violent attacks in some parts of the state.

He said the Matawalle administration had ‘partnered effectively’ with the APC-led government at the center, adding that it was in the best interests of the people to preserve the partnership with the election of Bola Tinubu and Bello Matawalle as president and governor respectively.

“My trip down here from Kaduna is testament to the fact that Governor Matawalle has recorded notable success in his fight against insecurity. No longer is the state dominating the headlines for negative reports of killings and deaths. Things have considerably improved on that end because of the total commitment of the governor and his effective partnership with the Buhari-led APC federal government,” he said.

“Our party has demonstrated what it means to run a people-focused agenda and it is in the interests of our collective progress as a nation, and your economic well-being and protection as the people of Zamfara, to ensure that we remain in power across all levels of government come 2023.”

“Please obtain your PVCs and let your votes count by electing Bola Tinubu as president and Dodo Matawalle as governor. Up and down the ballot, you must place your thumb only against the party with the umbrella logo so we can continue the important task of sweeping away the looters of our joint patrimony and reposition the country for greatness.”

Israel also paid homage to the Emir of Gusau, Alhaji Ibrahim Bello, to congratulate him over the national honor bestowed upon him by the president and to praise his fatherly role and outstanding contributions toward peace and development.

He was accompanied by youth leaders of the party’s state chapter with whom he held a closed-door meeting to discuss plans and assess their readiness for the election, particularly the attainment of the youth wing’s set goal to deliver over 40 million votes to the APC in 2023.