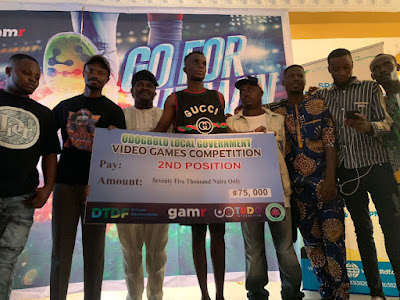 Recapitulate that on November 30th, 2022, Dr Tunde Diya Foundation in partnership with Gamr, held the 3rd edition of the Video Games Competition ( Esports Tournament ) in Odogbolu Local Government, where 3 players won the sum of N250,000 and other prizes. The youths namely Mustapha Oluwaseyi Samuel from Odogbolu, Ward 5, in 1st position, Ayodele Toluwani Elijah from Idowa, ward 8 who came 2nd and Anjoro Taofeek Tunde from Odogbolu, Ward 4 who took 3rd position, have been engaged and enlightened along side the other hundreds of participants on a world of opportunities in the Esports Industry, a multi-billion dollar industry bigger than Hollywood. The dream is for Ogun State to produce world class Esports champions.

"An apple doesn't fall far from it's tree they say", we need to emulate a leader that shows capacity, is worthy and has taken giant steps on youth engagement and development : Prince Dapo Abiodun MFR who has not just started by raining millions of naira on the 40 plus athletes that won Gold, Silver & Bronze medals at the just concluded National Sports Festival in Delta State, but has done similarly to the best performing academic students in Secondary Schools and Universities across Ogun State. Even the son of the soil, Laycon from the Television Drama Show, Big Brother House was embraced and encouraged. Not to forget the world class athlete, Tobi Amusan who was given a heroines welcome at Oke Mosan when she broke the world record in Track & Field and in 100m Hurdles. How else would you commend and encourage the youths to shun violence and embrace productivity if not through Job Creation, Sports and Entertainment?

Dr Diya believes for there to be continuity in performing these much needed and wonderful deeds, the youths must collectively work hard to ensure that the Dapo Abiodun MFR's administration is re-elected for a 2nd term by voting the APC come February & March, 2023.

Let us continue to transform lives, while building our future together. DTD concluded.