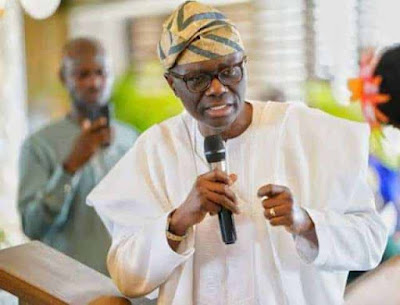 A group of Nollywood actors consisting of Taiwo Hassan aka Ogogo, Tunde Usman - Okele, and Adekunle Ayanfe aka Monsuru have released a mini-movie to drum support for the Lagos state governor and APC governorship candidate, Babajide Sanwo-Olu.

The movie which is a collaboration with Apc national youth leader, Honorable Dayo Israel and Greater Lagos Development Forum is aimed to enlighten the public on the achievements of governor Sanwo-Olu and why he should be voted for a second term in office.

In the eight minutes long project, the actors highlighted some of the achievements of the present Lagos governor who seeks a second term.

Ogogo played the role of a father whose admiration for the governor is unmatched as a result of his works within his first two years in office.

Highlighting one of Sanwo-Olu’s achievements, the movie focuses on blocks of classrooms, flats, prepaid meters, road constructions, educational materials, security, women empowerment and transportation among others.