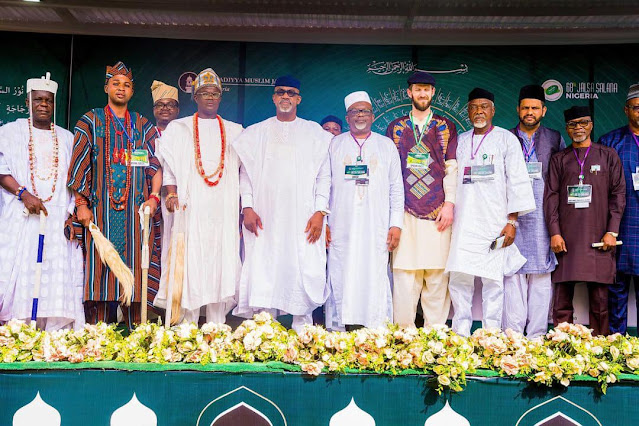 ....as governor visits Celestial City, promises to fix Imeko-Abeokuta Road
The Ogun State governor, Dapo Abiodun, has called on Muslim faithful in the state and across the country to perform their civic rights as the 2023 general election draws closer.
Abiodun who made this call at the 68th Annual Convention of the Ahmadiyya Muslim Jama'at, held at the Jamia Ahmadiyya Ground in Ilaro, noted that Muslims performing their civic rights isn't just a duty to themselves alone, but to the Almighty Allah.
The governor, while urging Muslims to ensure they get their Permanent Voter's Card, said that his administration since it came to power has been able to lower the political temperature.
He affirmed that his government has also been able to promote inter-party tolerance and appealed to Muslims across the country not to allow themselves to be used as political thugs.
"The election is coming, let us perform our civic duties. And as we participate in the electoral process, we must not be disenfranchised.
The election starts from registration, we must ensure we get our permanent voter's card and then after that, we must ensure we present ourselves for the election and exercise our franchise. This is a duty to ourselves as it is a duty to the Almighty God, because it is through us Almighty God chooses those that rule over us," he said.
Abiodun, who commended the Ahmadiyya Muslim Jama'at for helping the country to shape young ones, guide the women in the society, equally lauded the Jama'at for being very strong in inter-religious harmony and peace.
The governor, while urging religious leaders to continue to teach faith, said that "If your sermons elucidate those kinds of topics, you find out that people will be more receptive to what we politicians tell them", he enthused
"This movement stands very tall, they are a very organized movement, they are very disciplined and they hold some values very highly and that is what continues to guide them since the inception of this movement in Nigeria.
"They are very strong in inter-religious harmony and peace and more importantly, they are also paying taxes here.
"You know that we by nature, we have more faith in our religious leaders than even government and we must continue to support our religious institutions as they preach peace, particularly to encourage them to ensure that the kind of sermon they preach for our people are the kinds of sermon that motivate them and give them hope and trust in the administration," he added.
Abiodun declared that his administration would remain committed towards the overall development of the state, adding that his administration was open to partnership.
The Olu of Ilaro, Oba Kehinde Olugbenle, in his remarks, commended the governor for developing the state and as well completing all abandoned projects left behind by his predecessor, noting that the second term ambition of the governor is sacrosanct.
In his remarks, the Amir of Ahmadiyya Muslim Jama'at of Nigeria, Alhaji Abdul-,Azeez Alatoye, while commending Governor Abiodun for his love and passion for Muslims in the state, acknowledged him for his pledge towards the scholarship programme of Ahmadiyya Muslim Jama'at of Nigeria.
Meanwhile, Governor Abiodun has assured that his administration would construct the Abeokuta-Imeko Road, to ease movement and enhance economic activities in the axis.
The Governor gave this assurance when he visited the Pastor and Spiritual leader of Celestial Church of Christ World, Rev. Mobiyina Oshoffa, at the International headquarters of the Church in Imeko, Imeko-Afon Local Government Area of the State. 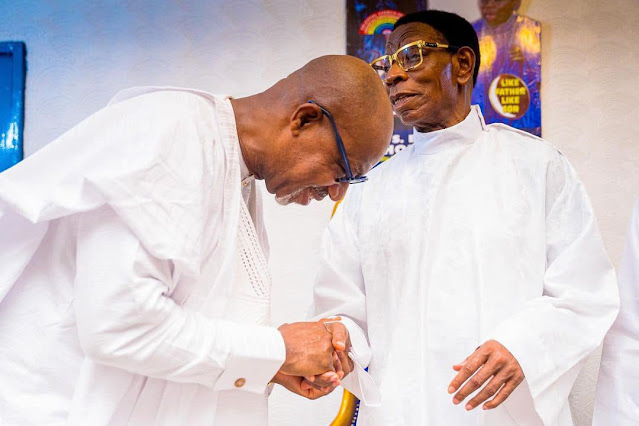 He said though the road belongs to the Federal Government, his administration would reconstruct it and make it motorable to reduce the agony people go through plying it.
"Your Eminence, I want to assure you that we will construct the Abeokuta-Imeko Road so that when people gather here next year, they will drive on a smooth road. This road is very important to the economy of Ogun State and by extension, Nigeria. This road will enhance movement of our people", he said.
Abiodun emphasized that no development could take place in a chaotic society, as peace is the catalyst that drives the socio-economic development of any nation.
"The social, economic and political development of Nigeria will be enhanced if Nigerians, irrespective of their religious affiliations, ethnic or politics to continue to live in peace and harmony with one another", he stated.
The governor described the church as the conscience of the society as people believe in church leadership to lead aright and fight for their cause.
Abiodun noted that God has a place in every individual's life as He directs the affairs of man the way He pleases, adding that he was in the church to worship and thank God for His mercies towards the state and its people.
He lauded the church for its contributions to the development of the state, noting that people learn to live together, love one another and worship God as one body.
While calling for more partnership with the church, Governor Abiodun pointed out that the gathering would revive the spiritual lives of the people as well as boost the economic wellbeing of the town.
In his remarks, the Spiritual Head of the Church, Rev. Oshoffa, said the people gathered for their annual pilgrimage and to celebrate his 20th ordination and 74th birthday, as well as His grace in their lives.
Oshoffa, who commended the governor for his giant strides, especially in the area of infrastructure, agriculture and education, maintained that the governor's visit had energized them and encouraged them to continue to pray for the success of his administration and the nation as a whole.
The spiritual leader later prayed for the peace and development of the state and the nation as a whole.