The Association of Ex-Local Government Chairmen of Nigeria (ASELGON) Ogun State chapter, .on Friday, announced its endorsement for the second term bid of Governor Dapo Abiodun.
Leading members on a courtesy visit to the governor at the Presidential Lodge, Abeokuta, the president and former chairman of Imeko/Afon Local Government Area, said the association was impressed with the achievements of the current administration in less than four years in office.
He explained that "the association is apolitical, but a convergence of the finest grassroots actors across political divides, whose goals is to deepen grassroots engagement and participation in the nation's polity and promoting the sanctity of the local government".
The former LG boss added the association was formed in 2013 and incorporated in 2017 as a platform of former elected chairmen.of LGs to contribute to the political development of the country based on their grassroots background, connections and interactions. 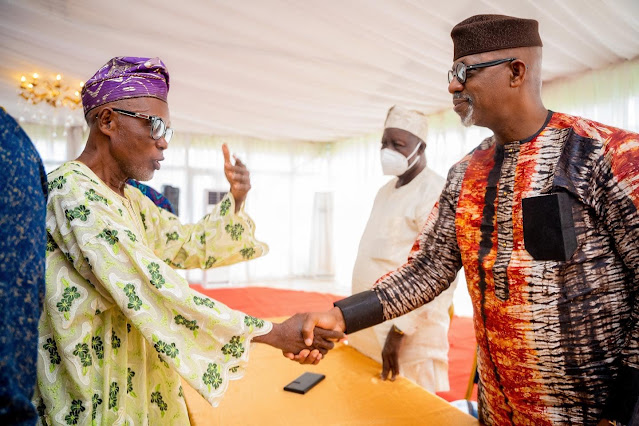 Asipa, however, stated that members of ASELGON in the state had met and reviewed the activities of the state government and agreed that the current administration has performed creditably well and deserves to be honoured.
"Your Excellency sir, I am a son of the soil and as a result of this, the association has endorsed your 2nd term in office. We will constantly work in harmony with your administration and participate in all your campaign activities.
"It may interest you to know that after today's endorsement, we promise to bring on board at least sixty percent of the councilors, supervisors, special advisers, consultants that served under each chairman so that everybody will be on the same page to support you", Asipa declared
The chairman of the All Progressives Congress (APC) in the state, Yemi Sanusi, in his remarks, applauded the former local government bosses for identifying with the current administration and extension of their hands of fellowship, having seen the impact the government has made in the state.
Sanusi said as past leaders who had made great contributions to the development of the grassroots, the present administration would be ready and willing to work with them, urging members to use their position and connection to work for the victory of all the party's candidates in the forthcoming elections.
In his response, Governor Abiodun said his administration has stuck and actualized its vision to lead a purposeful governance that would create enabling environment through public-private partnership for the state.
He added that the current administration had used the past three and a half years to justify the mandate given to it.
According to the governor, sectors that have positive impact on the people are given due attention just as the government had established trust with the people through participatory, inclusive, just and equitable governance.
"We've reestablished trust between us and the private sector; we established trust between us and all those who have voted us into office. We intend to keep this up, we intend to ensure that no part of this state is developed at the expense of another part.
"We intend to ensure that every ongoing project that we inherited that has economic importance to our citizens is completed.
"You can't even begin to count the number of roads that we have done, if we are commissioning two to three roads every week, we can't finish commissioning till May 29.
"In Ogun Central alone, from Denro-Ishashi-Akute to Toyin Street, Osoba street to the Vespa in Ifo to the journalist Estate road in Arepo to Siun-Owode we are doing right now to Mowe-Ofada that we are doing.
"We are doing the road that connects Ijoko to Alagbole to Akute, we had to jump on that road immediately, we have about three roads in Ifo 2, that is just in Ifo, we have not talked of the ones in Abeokuta, is it the Olomore-Sanni road, Elite road, Isale-Ake-Oke-Jigbo road, Elega road, Adigbe road, Kemta-Somorin, Fajol road, we can't even finish counting them across the state.
"The idea is not to be able to count them. When you are able to count, it means that you haven't done anything when you start to say we have done three roads, it should be so numberless, and we are still talking about Central, we have not talked about the West or the East," he said.
While further informing members of the association some of the projects executed by his administration in less than four years, the governor said the state Agro-Cargo Airport which is supported by the African Development Bank and the International Finance Bank is nearing completion while the oLokola Deep Sea And the Kajola Dry Port would soon come on stream.
Abiodun thanked the ASELCON members for appreciating the modest achievements of his administration, assuring that they would be involved during the unveiling and flagging off of his campaign coming soon