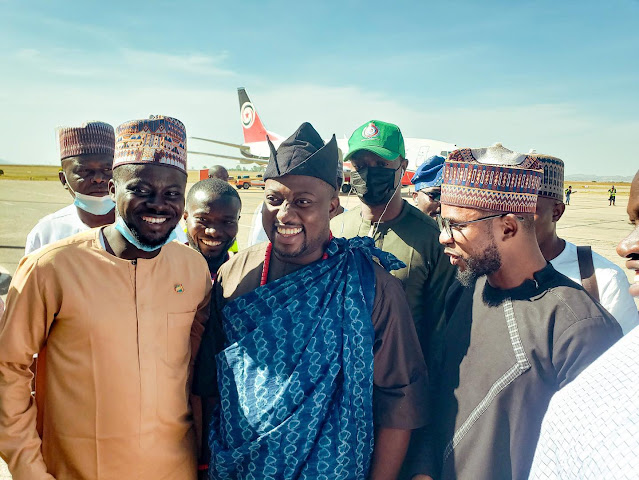 APC National Youth Leader, Hon. Dayo Israel, has charged youths of Plateau State to reward Bola Tinubu’s lifelong commitment to youth growth and development by supplying the votes to secure his emergence as the country’s next president in 2023.

He made this call on Friday when he arrived in the state in continuation of his nationwide youth mobilization and energizing tour. Plateau State is the home state of Governor Simon Lalong, the Director-General of the APC Presidential Campaign Council.

Addressing over 5000 youths that gathered to receive him in the company of other party and government stakeholders led by Governor Simon Lalong who was represented by the State’s Commissioner for Youth and Sports Development, Dayo said Tinubu has maintained a credible and unmatched record as a builder of people and harbinger of prosperity, adding that he has the brilliance and vision required to elevate the country’s standing across sectors.

He said: “Tinubu is the only politician in Nigeria with a nationwide trail and network of accomplished individuals spread across all fields of life who owe their success to his generosity, faith in potential, and commitment to supporting others to fulfill their destinies.”

“Under his guidance and tutelage, many have become governors, ministers, and even the Vice President. Beyond that, he has empowered innumerable young people who are high flyers today in various sectors."

"In the process, Asiwaju has contributed to the improvement of national productivity and offered opportunities for families and communities to attain new levels of comfort and living standards. He builds society by identifying, investing, and empowering talents.”

“I am the son of a widow who could study in England because he gave me a scholarship. Today, I lead and mentor others, all of us contributing to national development. This is the Asiwaju model, his legacy, and it is why you must do everything within your power to ensure that he is sworn in next year as our next president,” Dayo said.

He assured the youths that if they play their part and ensure the APC’s victory up and down the ballot in Plateau State, they can be assured of having a powerful advocate and representative in him who will ensure that their effort is rewarded and they are offered a seat at the table.

Dayo Israel was honored with an award by NYSOP, a national support group affiliated with the APC, over his commitment to the party’s growth and transformation of the youth wing since his emergence as National Youth Leader.

On his part, Hon. Daniel Dung Dalyop, the Commissioner for Youth and Sports Development in Plateau State who represented the Governor at the event, expressed the state’s readiness to deliver the votes to Bola Tinubu whom they believe has the right skills and attributes to pilot the affairs of the country.

The State Chairman of the APC, Hon. Rufus Bature, who was also present added that the mobilization in the state for Tinubu and the APC is in full gear. He commended Dayo Israel for his visit to the state, saying that his hands-on and bottom-up approach, as evidenced by the ongoing tour and his inclusive style of leadership, represents a worthy example to others and will contribute to the party’s success at the polls in 2023.

Furthermore, the Women Leader of the party in the state, Hon. Alice, said the party had fulfilled its pledge to ensure the meaningful inclusion of women, particularly with high representation of women in the presidential campaign council and the creation of a separate wing dedicated to women - a feat none of the other parties managed to achieve.

According to her, the adequate women representation, along with other achievements of the party in the country and the state, will translate to votes in 2023, with women playing a key role in Tinubu’s victory.

Other members of the State Working Committee of the party present included the Organising Secretary, State Youth Leader Comrade Nanloh Joseph, among others. The Chairman of Jos South LGA and other members of the local executive and legislative council were also present.

APC Gida Gida, Ladies 4 Generation Next, and APC Strategic Monitoring Team were some of the support groups ably represented at the event. Also in attendance were SUG Presidents of all the higher institutions of learning in the state and other youth-focused lobby and support groups.