...as Ogun Central hosts 2023 budget town hall meeting
The Alake and Paramount Ruler of Egbaland, Oba Adedotun Aremu Gbadebo has commended the effort of the Governor Dapo Abiodun-led administration in the area of infrastructural development Ogun State, declaring that "you cannot beat a governor who makes promises and keeps promises". 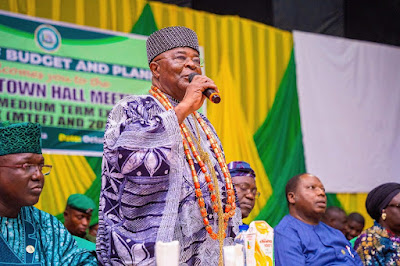 Oba Gbadebo who gave this commendation during the Town Hall Meeting on the Medium Term Expenditure Framework (MTEF) and 2023 Budget for Egba Division, held at the June 12 Cultural Center, Abeokuta, also declared that the governor has done incredibly well for the Egba Division in terms of infrastructural development.
The Alake, however, called on the governor not to rest on his oars, congratulating him on the public service award he recently received from President Muhammadu Buhari, saying "this is honour well deserved".
"All the list that I had with me, as the governor was speaking, I started ticking them off one after the other. You see, you cannot beat a governor who makes promises and keeps promises.
"All the roads I listed here, he had started work on them and completed some, and he has promised to start on new ones," he said.
The monarch who also commended the present administration in the state for its stride at increasing the Internally Generated Revenue of the state and being named as the fourth best state in terms of revenue generation after states such as Lagos, Federal Capital Territory and Rivers State, charged the Governor Abiodun to up the ante as the state has the capacity to challenge even Lagos State.
He further applauded the governor for his feat in the area of housing in state, stressing that "in terms of housing, you have done more than any other governor in building houses in the history of the state".
"Please, I want this record to continue to go higher and higher, please, build more", Alake added. Speaking earlier, Governor Abiodun disclosed that his administration would begin its Light Up Ogun project towards actualising uninterrupted power supply in the state, adding that transformers would be given out to local governments across the state.
"In line with our Light Up Ogun project, we will be flagging off the pilot scheme right here in Abeokuta, the Light Up Ogun project promises to deliver uninterrupted power supply to Ogun Central, particularly Abeokuta," he said.
Abiodun who also noted that his administration would continue to sustain it's position as investors destination of choice, noted that he won't allow any form of insecurity to affect its position as the investors choice.
Meanwhile, the governor refuted the allegation that his administration has been taking 30 percent of funds meant for local government areas in the State.
He explained that instead of taking funds from the local government, his administration has been given the LGs between N200m to N300m on a monthly basis to augment their allocations in to enable them meet their financial obligations.
The governor noted that his administration has remained firm in the distribution of funding to all the tiers of government, maintaining that the rumors of depriving local government of fund is completely unfounded.
"We have continued to support our local government administration every month. We ensure that we give them a minimum amount to allow them to function because their allocations over the last six months had not been enough to meet their expenses let alone execute any capital project.
"As a responsible administration, we continue to bail them out every month to the tune of N200m to N300m a month because they are the closest to the people and they must function.
"We also have a sharing formula which allows us to take all the generated funds in transport, land use and 20 percent of that is allocated back to the local government. When they say that we deprived the local government the revenue is not true.
"Whatever is generated is spent judiciously and we ensure that there is a fair and equitable distribution of infrastructure which can be seen across the length and breadth of the state". Abiodun stated.
He, however, observed that the centrality of the Egba Division and its people cannot be overemphasized in the development plan for the socio-economic valve of the state, stressing that the senatorial district apart from being home to the state capital, also acts as the link with other parts of the state.
In his opening remarks, the Economic Adviser and Commissioner for Finance, Mr. Dapo Okubadejo said similar meetings, which had taken place in three other zones, were meant to aggregate the people's inputs that would form the basis for next year's budget, appealing to all stakeholders to make meaningful contributions that would lead to a people's oriented budget.
Commissioner for Budget and Planning Mr. Olaolu Olabimtan, in his presentation, said 68 projects were executed in each of the senatorial districts in the state,emphasizing that no local government area was left out on project allocation and execution.