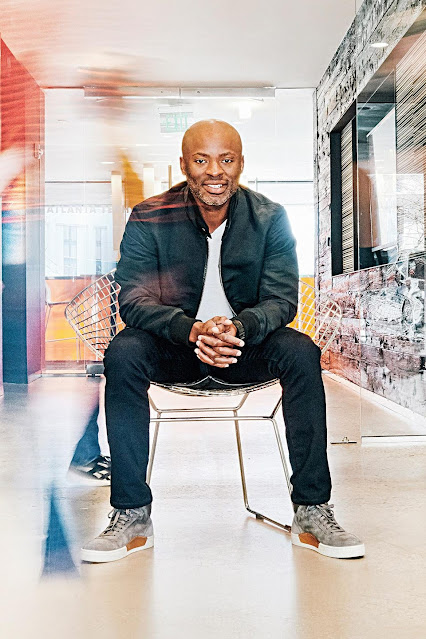 Tope Awotona, the 40-year-old founder and chief executive of Calendly, leans back in his chair and lets loose a loud guffaw.

“You call it on message, I call it the truth,” he says, slapping his hands on the table. The truth, as Awotona has it, is that everyone needs Calendly, his scheduling software, to lead better, more productive, happier work lives.

Nine years ago, Awotona started Calendly, pouring his life savings of $200,000 into it and later quitting his job selling software for EMC. Today, the company has 10 million users and counts Lyft, Ancestry.com, Indiana University and La-Z-Boy among its customers. Revenue last year passed $100 million, double what it booked the previous year. It could double again this year.

The company, which was founded in Atlanta but no longer has any physical offices, has been profitable since 2016. Last year it raised $350 million in funding from OpenView Venture Partners and Iconiq Capital at a price that values the business at $3 billion. That means Awotona’s majority stake is worth at least $1.4 billion, after the 10% discount that Forbes applies to shares of all private companies. Awotona is one of just two Black tech billionaires in the United States, along with David Steward, the 70-year-old founder of Missouri-based IT provider World Wide Technology. “Tope could be the most successful African-American tech entrepreneur of his generation,” says David Cummings, founder of Atlanta Ventures, which led a $550,000 seed investment in Calendly seven years ago.

Calendly doesn’t have the scheduling business to itself. Square, Microsoft and Zurich-based Doodle offer competing products. But Calendly has gained traction with its sleek, consumer-friendly design and its freemium model that lets it gain paying customers with no marketing.

Awotona is now moving beyond scheduling meetings to creating tools that help recruiters, salespeople and other white-collar workers manage those meetings before and after they occur. That means routing meetings to the right person at a large company and adding relevant documents, such as agendas and budgets, that are needed to make the meeting run more smoothly in the invitation itself. It also includes integrating with productivity tools like Salesforce to track results. Others may view scheduling meetings as drudgery, but Awotona sees it as key to making connections to everything that happens within an organization. This expansive view allows him to speculate that the global market Calendly is selling into is potentially worth $20 billion.

“In my life, I’ve benefited from not taking the conventional wisdom,” Awotona says. “It’s benefited me personally, and I think it has benefited the business.”

Awotona was born in Lagos, Nigeria, into a middle-class family. His father was a microbiologist and entrepreneur; his mother worked at the central bank. Lagos, a city of 15 million, is economically vibrant but dangerous. When Awotona was 12 he witnessed his father get shot and killed in a carjacking. “There was a part of me, from a very early age, that wanted to redeem him,” he once said.

In 1996, when he was 15, he moved with his family to Atlanta. He studied computer science at the University of Georgia, then switched to business and management information. “I loved coding, but it was too monotonous,” he says. “I’m probably too extroverted to be a coder.”

Instead, he sold software for tech companies, including Perceptive Software, Vertafore and EMC (since acquired by Dell). He also founded a few businesses on the side: a dating website, a company that sold projectors and another that sold garden tools. All three were flops.

His idea for Calendly was different in that it was sparked by his own frustration as a salesman setting up meetings—a task that would sometimes take dozens of emails and days of delay. “The obvious idea to me was that scheduling is broken,” he says. In 2013, he launched Calendly from Atlanta Tech Village, a coworking space for entrepreneurs. To fund it, he raided his 401(k) and maxed out his credit cards. “It could’ve gone really badly,” he says. “With my previous businesses, I hedged my bets a little bit and gave myself a way out. With Calendly I flew into a war zone and put in every cent I had. If you’re going to do something, you have to go all in.”

For programming help he contracted with Ukrainian firm Railsware. Awotona was in Kyiv eight years ago as protesters battled government forces in the streets. Now, amid the war, Calendly has helped relocate its 10 Ukraine-based contract developers at Railsware and has provided financial support to them and their families.

By late 2013, Awotona had a viable product but no cash left. Seed investors, led by Cummings, came to the rescue with a half-million-dollar infusion. Calendly is free for individual users, but typically costs corporations $25 per user per month. “Employees sing the praises of our product to their higher-ups and it bubbles up,” Awotona says. “That’s the Trojan horse of how we get into companies.”

Enterprise customers can set up customized landing pages, route meetings to specific groups of people and connect their Calendly software to other tools, such as Salesforce, Stripe, Zoom and Hubspot. Large customers, which Calendly defines as those paying more than $100,000 a year, have grown tenfold over the past 12 months as Calendly has built up its internal sales team. Publicly traded car shopping site CarGurus, for example, has scheduled some 2,000 sales meetings with its dealers through Calendly since signing up last May. That has meant savings of 500 hours of employees’ time, says CarGurus senior digital strategist Michael Riley, who led the Calendly rollout.

Last June, US Foods, a large food supplier based outside Chicago, rolled out Calendly to 100 people who work with independent restaurants, mostly mom-and-pop shops. The deal let US Foods set up customized templates for meetings, in both English and Spanish, and incorporate new sales and other outcomes into its strategic planning. “That visibility was a huge selling point for signing an enterprise agreement with Calendly,” says David Eschler, vice president of restaurant operations at US Foods. For its corporate customers, Awotona says, the cost of Calendly is more than offset by productivity increases.

The power dynamics of Calendly can be complicated—who invites, who accepts—especially for those professions, like venture capital, in which that kind of thing really matters. Awotona, who says that hasn’t been an issue for the typical recruiter or salesperson, watched in amazement as his firm became the object of a Twitter war this winter. Sam Lessin, a VC with Slow Ventures, tweeted about his hatred of Calendly on January 26, calling it “the most raw/naked display of social capital dynamics in business.”

“Who hurt you Sam,” riposted Dustin Moskovitz, the billionaire Facebook cofounder whose project manager business, Asana, is a Calendly customer. Added VC Marc Andreessen (net worth $1.7 billion) in a since-deleted tweet: “Notice with immediate effect: Anyone who disregards my Calendly links will be permabanned from raising venture capital in Silicon Valley.”

Awotona says the kerfuffle led to tens of thousands of new users signing up. “Our marketing team has spent a lot of time thinking about how to get people talking about Calendly this year. We didn’t know the easiest way was to put out some tweets,” he says. “We couldn’t have planned it better.”

Now Awotona, who took the 424-person company fully remote last summer, plans more features to push Calendly further into what needs to happen before meetings (such as having candidates’ résumés attached to recruiters’ calendar invitations) and after them (such as increased analytics). He’s also planning international expansion, believing that the pain of scheduling is felt across all geographies and languages.

“The opportunity to make each meeting efficient and achieve its stated purpose is what we’re about,” says Awotona, who confesses to spending 25 hours in meetings in an average week. “We see scheduling as an opportunity to set the meeting up for success—how you schedule the meeting, simplified preparation and follow-up. That is our grand vision.”