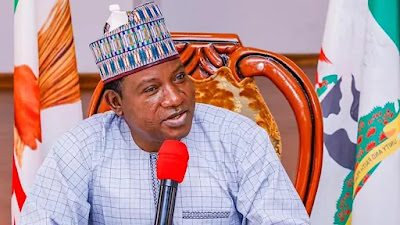 A member of the National Governing Board of the National Youth Service Corps (NYSC), Prince Kunle Oyewumi has applauded the choice of Governor of Plateau State, Rt. Hon. Simon Lalong as Director General of the All Progressives Congress (APC) presidential campaign council for the 2023 general election.

Describing Lalong as a highly detrabilized Nigerian, who has created a niche for himself in the private and public sectors, the businessman commended President Muhammadu Buhari and APC Presidential candidate,  Asiwaju Bola Tinubu for appointing the Governor as DG.

The Board member stressed that Lalong, who enjoys a wide acceptance beyond the shores of  Plateau state, will work harmoniously with  stakeholders and members of the party in a bid to ensure victory for the party in the forthcoming presidential election.

He said, " the appointment of Governor of Plateau State, Rt. Hon. Simon Lalong as DG of the APC presidential campaign council is a good and timely development.

"The Governor's antecedents in the private and public spheres of life is a testament to his intellectual acumen, political dexterity and administrative prowess.

"The choice of Lalong is a positive development for the APC.

"I am optimistic with the support of Nigerians, the APC will come out victorious with Asiwaju Tinubu winning the presidential poll".

The Ogbomoso Prince wished Lalong  success in his new role.