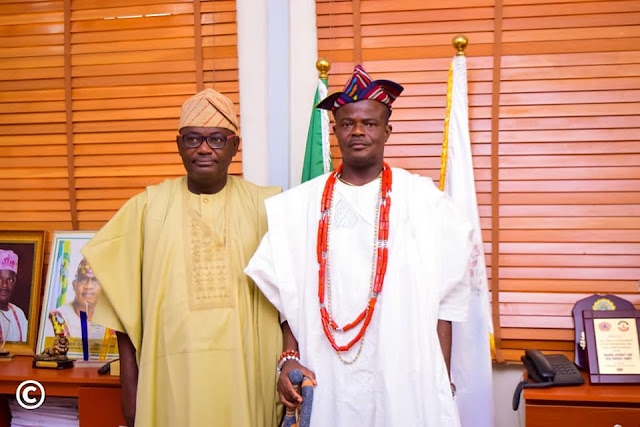 …..As Baale of Pahayi Declare Total Support
As activities towards the 2023 general elections begin, a foremost politician of Yewa extraction, Gboyega Nasir Isiaka, has consulted the Olu of Ilaro and Paramount Ruler of Yewaland, HRM Oba Kehinde Olugbenle, in furtherance of his ambition to represent the people of Ogun West senatorial district at the national assembly.
It will be recalled that Isiaka, fondly called GNI, joined the senate race two weeks ago at a stakeholders meeting of The Believe Movement, a sociopolitical group he founded in 2016.
Speaking at the palace of the monarch, the Chairman of Ogun Guangdong Free Trade Zone said he was contesting for the senate in order to enhance the dignity of Yewa-Aworiland and emancipation of the people from political backwardness and economic redundancy. 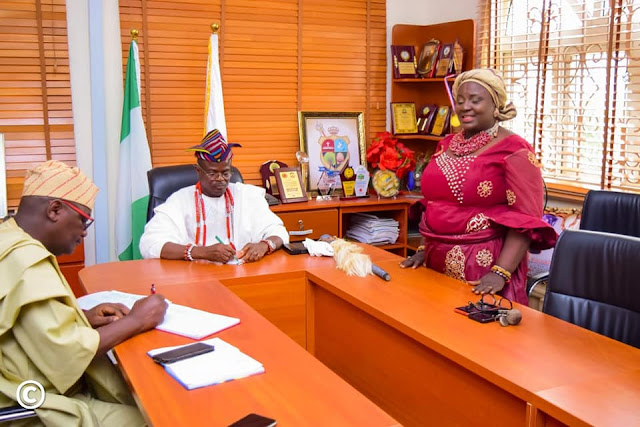 He said, “Kabiyesi, this palace is second home to me and I have always come around, but my visit today is to inform you that I will be contesting for the senate seat of Ogun West under the platform of the APC. As you know, the trajectory of my previous electoral contests has been in a particular direction, which is to see the emergence of a greater Ogun State and ensure the accelerated development of our district”.
According to him, “Aside being born and brought up in this environment, I have been all over ogun west many times in my adult life. I understand the people, our culture, our challenges and aspirations. I have contributed in many ways to the good cause of this senatorial district and the records are there. I am not only passionate in fast-tracking growth and development for us, I have the understanding of the task at hand; therefore I seek your support in this race”.
Responding, the paramount ruler thanked GNI for the visit and acknowledged his past efforts. “You are well known to this palace and beyond. I thank you for the honour of this courtesy visit and the decision to inform me of your ambition. As traditional rulers, our job is to seek and promote the growth of our communities and as one of my sons; you always have my best wishes in your endeavours”.
“However, I have received communications from people with regards to what formula or which area should the senate seat go to, but then, you have just provided useful and illuminating set of information and I believe everything will add up eventually”.
Meanwhile, the Baale of Pahayi community, a suburb of Ilaro town, has declared his total support for the senatorial ambition of GNI. In his welcome remark while receiving the senatorial aspirant in his quarters, the traditional head, Chief Emmanual Olabisi Ekunola, praised the three time gubernatorial candidate for his courage and perseverance, stating that he has paid his dues and deserve the senate seat.
In his words, “GNI, you are a son to this community. You have my total support in this race. I have known you a long time and followed your activities since your time at Gateway Holdings, where you facilitated many empowerments to our people and initiated developmental projects to Ilaro and beyond. I have no doubt that you will make a good representative to us at the senate”.
The aspirant thanked the Chief for the warm welcome and endorsement. “I am humbled at your kind words and will take this as an encouragement as I step up my consultations across the district”; He noted.