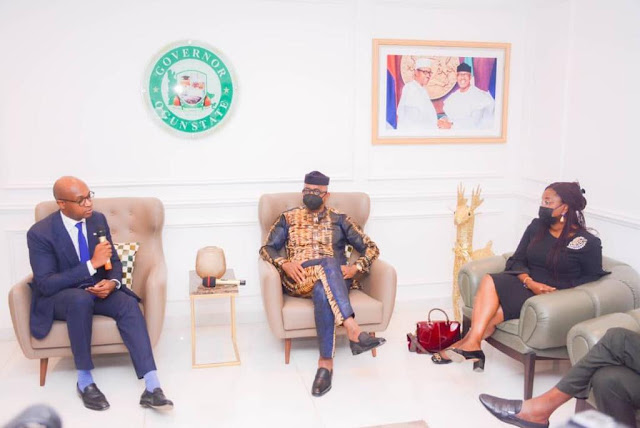 Determined to ensure provision of affordable houses to the people of Ogun, the state government has finalised plans to partner First City Monument Bank (FCMB) to provide loans for interested in subscribers of government housing schemes.

The Group Chief Executive of the FCMB, Ladi Balogun, while speaking when he led the management staff of the bank on a courtesy visit to Governor Dapo Abiodun in his office at Oke-Mosan, Abeokuta, on Wednesday, noted that the bank gesture was to enable residents of the state own houses they could call their own.

He stressed that the financial institution was ready to give the Governor Abiodun-led administration support through its Corporate Social Responsibility platform, saying the government alone can not carry the burden of meeting the needs of the people.

Balogun, who described 2021 as a difficult year for everyone, explained that the meeting with the governor was to open a channel of engagement that would promote the quality of lives of the people, adding that the bank would work with the state government on any area it chooses for collaboration.

While appreciating the state government for its developmental strides, especially in the area infrastructure, Balogun said that the desire of the bank was to help the present administration finish its tenure well and as well as lay a solid foundation for the future".

"We are willing to do more with the present administration in the state in the area of Corporate Social Responsibility. The bank is focused on how it can elevate the quality of lives of the people they serve and work with", the FCMB CEO stated.

Responding, Governor Abiodun called for a more robust relationship between his administration and the management of the bank in its quest to make more people become landlords.

Abiodun noted that despite his administration's efforts at providing over 1,000 homes in the last 30 months, the effort seemed not enough as people have continued buying faster than what is currently on ground.

He observed that the effort to make homes available to the people through direct labour has created employment for the artisans, thereby reducing criminal activities among youth in the state.

"We must get our people from being tenants, particularly people who are civil servants. It also allows us to create employment, we are using direct labour to build those homes and we have done about 1,000 in 30 months and those are affordable homes of N6million. We can't even build fast enough; people are buying them faster than we are building them. They are either paid in full or paid in part, those are areas that you could work with us", he stated.

Abiodun added that his administration was willing to work with the bank in the areas of concession, management or financing.

The governor, while also urging the bank to adopt a school through the adopt-a-school programme put in place by his administration, disclosed that his administration in the last 30 months has renovated 1,000 classrooms, with about 2,000 more to renovate