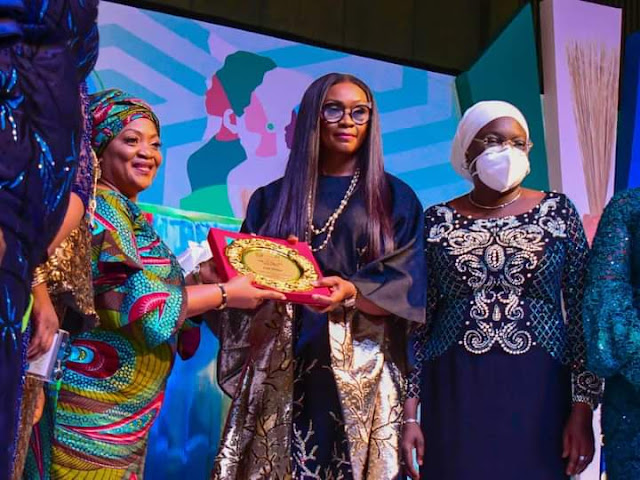 The Ogun State governor, Dapo Abiodun has won the All Progressive Congress (APC) National Progressive Women award for his leadership style and promotion of women inclusion and empowerment in his administration.

The award was presented to the governor by the Vice President of Liberia, Dr. Jewel Taylor at the Gala Nite of the 1st APC National Progressive Women Conference 2022, held at the International Conference Centre, Abuja.

The organisers of the two day event, while presenting the governor's award to his wife, Mrs. Bamidele Abiodun, who was supported by the deputy governor, Noimot Salako Oyedele and female cabinet members, noted that the governor has been in the forefront of women emancipation and empowerment in the country.

They further noted that Ogun is one of the only two states in the country with females as deputy governors.

The objectives of APC National Progressive Women Conference according to the body,  is "to indoctrinate gender mainstreaming in party process implementations at the national, zonal and state levels; to upscale women visibility, inclusivity and equal representation in politics, business and governance.

"It is also to mobilize Nigerian progressive women with a mandate to amplify their collective concerns for parallel strategic positioning of women for future political offices", the organisation added.

In her Keynote address, 'Women Political Leaders: Leveraging Networks to Transform Nigeria', Dr. Taylor urged women to always aspire to be in the forefront of speaking with One Voice!

Taking from the theme of the Conference ‘One Voice: Women Uniting For Progress', she contended that "only by coming together to support one another from ward level to national level can women break all forms of barriers".

Also in attendance was the Vice President, Prof. Yemi Osinbajo who launched the Trust Fund for women political aspirants.

The state delegation was led by the deputy governor, Noimot Salako Oyedele, who was also awarded a ‘She for She’ Award in recognition of her quality representation and role in promoting women visibility and empowerment in Nigeria.

A former deputy governor in the state, Alhaja Salmot Badru was also given a ‘She for She’ award in recognition of her previous service in the State and continued support for the party.