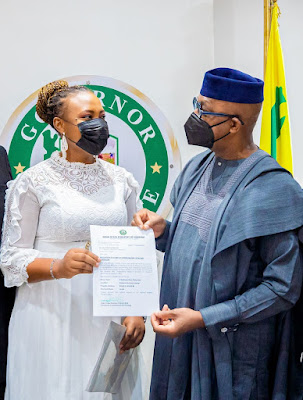 Governor Dapo Abiodun of Ogun State has rewarded Joy Oyinlola Adesina, who emerged the Best Graduating Student from the Faculty of Clinical Sciences, Obafemi Awolowo University (OAU),Ile Ife, with a house, a sum of N5m and a scholarship for further studies.

Abiodun, who announced the rewards at the reception organised in honour of Miss Adesina, on Wednesday, noted that the medical scholarship would be for her residency at the Olabisi Onabanjo University Teaching Hospital, Sagamu.

The governor noted that the awardee by being the best medical graduate to have come out of the OAU is "an accomplishment, a rare feat that most of her peers can only dream of."

Governor Abiodun observed that "her accomplishment is coming on the back of the spectacular performances of some of our young indigenes, who recently excelled in their various academic pursuits and were duly rewarded by our Administration under a programme called the Ogun Academic Laureates". 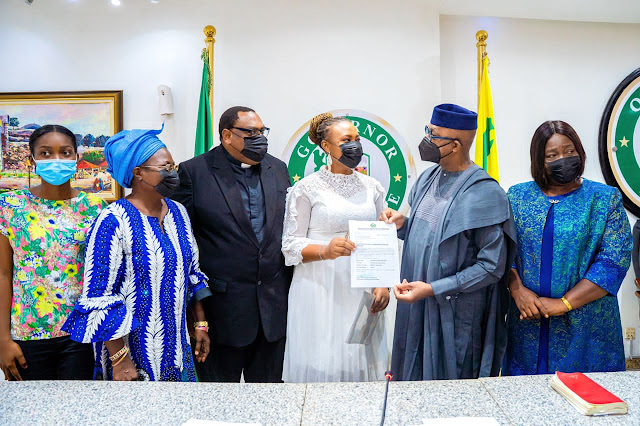 Abiodun noted that with the Ogun Academic Laureates Awards, his administration has introduced hope to rekindle passion for excellence in academics excellence and innovation, especially for the successor generation.

He reiterated that his administration would continue to recognize and honour exceptional indigenes or residents of Ogun State, who through a dint of hard work attained academic excellence and are found worthy both in character and innovations.

Abiodun disclosed that Ogun Academic Laureates had been fully rewarded with the promised scholarships, cash prizes and houses, stressing that "we did this, not just because it is the right and honourable thing to do having made the promise, but also because we are a promise-keeping administration. We do not make promises that we do not intend to or cannot fulfill".

"We are all gathered here to celebrate the rare academic feat attained by Dr Joy Oyinlola Adesina, an indigene of our dear Ogun State who went to the Medical School at Obafemi Awolowo University, Ile-Ife. She saw, she learnt and she conquered, returning home after hard study and rigorous examinations with a record breaking of 10 distinctions and 9 top awards.

"Dr Adesina won virtually every academic laurel available in medicine at OAU, Ife. We are proud of not only you, but people like you, especially the young ones who continue to fly the flag of excellence and Omoluabi, for which we are renowned.

Abiodun, who tasked the awardee to put her intellectual prowess into research and scholarship, expressed optimism Adesina might be Africa’s first Nobel Laureate in Medicine.

While calling on the private sector to collaborate with the state government through its Public Private Partnership (PPP) programme to reposition education in Ogun, the governor assured that his administration would continue to appreciate and reward positive enterprises and achievements by sons and daughters of the state, especially the  youths.

"Let me assure all the people of Ogun State that our administration will continue to put measures in place towards providing quality education for our youths as an impetus for an assured future.

"As an Administration, we will continue to appreciate and reward positive enterprises and achievements by sons and daughters of Ogun State, especially our youths. Youngsters like you assure us of a brighter future. I see hope in our youth, no matter the narratives from naysayers", Abiodun submitted.

Responding, the honouree, appreciate the gestures extended to her by the State, saying that: " I am very fulfilled".

She thanked her uncle, Dr. Akinwunmi Adesina for "his inspiration" and parents for their love and support to achieve the feat at the medical school.