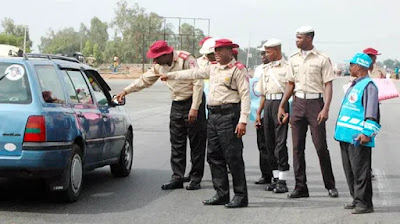 A bus driver and his 18 passengers escaped death by a whisker on Monday after their vehicle somersaulted on the Long Bridge, Warewa end of the Lagos-Ibadan Expressway, Ogun State.

The driver, who did not identify himself, told our correspondent that the vehicle somersaulted after it had a flat tyre while he was speeding.

“I was driving when I heard a loud bang indicating that one of the tyres had burst,” he stated.

The driver said he lost control of the vehicle immediately, adding that he and his passengers were trapped in the bus after it tumbled on the bridge.

Motorists and commuters who witnessed the crash while coming behind the vehicle disembarked from their buses, as they rushed to rescue the trapped victims.

While some of the victims cried due to shock after they were extricated from the bus, others writhed in pain due to the injuries they sustained.

The passengers were too distraught to speak about the near-death experience when approached by PUNCH Metro.

Our correspondent observed as officials of the Federal Road Safety Corps diverted traffic from the lane and attempted to tow away the vehicle from the road.

The Ogun State Sector Commander, FRSC, Ahmed Umar, who confirmed the accident, said there was no loss of life.