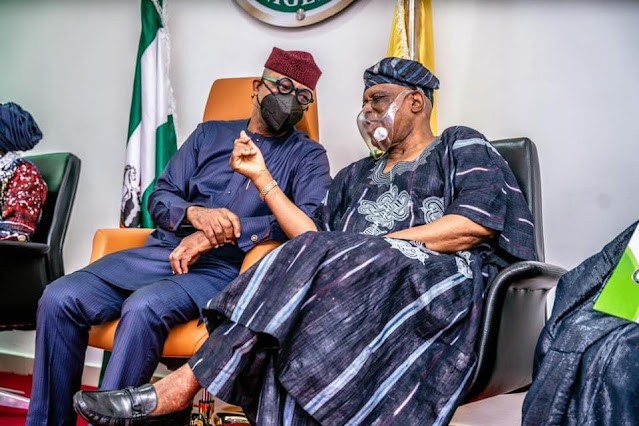 Ogun State governor, Prince Dapo Abiodun, has congratulated the former governor of the state and the leader of the All Progressives Congress (APC) Aremo Olusegun Osoba over a successful knee replacement surgery.
Abiodun, in a statement by his Chief Press Secretary, Kunle Somorin, on Friday, said that the elder statesman who underwent the surgery in the United Kingdom on Thursday 30th September is recuperating very well.
The governor had, during his recent short trip to the United Kingdom visited Chief Osoba ahead of the surgery and also spoke to him before and after the procedure on Thursday.
Prince Abiodun, who equally spoke with the former Governor earlier today before the celebration of the country's 61st independence anniversary held in the state said Baba was in high spirits.
The governor thanked the Almighty God for granting Chief Osoba good health to contribute to nation building, and further prayed God to grant the former governor a long life and usual vibrancy.
Abiodun noted that though Chief Osoba was absent at the independence celebration, his felicitations and encouragement reinforced the vision that Nigeria as a country will attain greatness.
The governor quoted the APC leader as saying that "Nigerians should rally round the leaders both at the federal and state levels, declaring that the country will overcome its present challenges."
"Our Baba, Chief Olusegun Osoba, underwent knee replacement surgery in the UK and we thank God that it went well, as he is now fine and in perfect condition. He spoke to me that he would have loved to be present at the independence celebration, but for the surgery.
"He is not here physically to be part of the celebration, but he told me his heart is with us. He sent his words of admonition and encouragement, and asked Nigerians not to lose hope in Project Nigeria. Even in his condition, Baba offered prayers for Nigeria in general and Ogun state in particular.
"I pray God will continue to preserve Chief Osoba and grant him good health. He assured that he will soon join us and continue to offer his fatherly advice to our administration and leadership for our great party, the APC", Abiodun was quoted to have said in the statement.