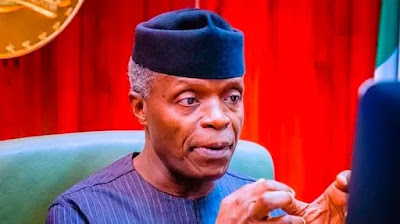 Vice-President Yemi Osinbajo on Monday called for an official rate that is reflective of market reality.

He said the current dual exchange rates allowed for arbitrage and blocked inflow/supply of dollars from investors.

Osinbajo said this on Monday in Abuja at the opening of a two-day Mid-Term Ministerial Performance Review Retreat organised to assess progress made towards the achievement of the nine key priorities of the Buhari regime. Experts, however, differed on the vice-president’s opinion.

This is as he said the country could not get new dollars into the system, where the exchange rate was artificially low.

The Vice President said the artificially low exchange rate was deterring investors from bringing foreign exchange into the country.

He said, “As for the exchange rate, I think we need to move our rates to be as reflective of the market as possible. This, in my own respective view, is the only way to improve supply.

“We can’t get new dollars into the system, where the exchange rate is artificially low. And everyone knows by how much our reserves can grow. I’m convinced that the demand management strategy currently being adopted by the CBN needs a rethink, and that is just my view.

“Anyway, all those are issues that when the CBN governor has time to address, he will be able to address in full.”

Osinbajo also suggested that the central bank was competing with the fiscal side of the economy, which includes the ministries, departments, and agencies of government.

“Sometimes, it appears that there is competition, especially on the fiscal side. If you look at some of the interventions, you will find that those interventions are interventions that should be managed by ministries.

“The Ministry of Industry, trade and investment should handle MSME interventions, and we should know what the CBN is doing.

“In other words, if the CBN is intervening in the MSME sector; it should be with the full cooperation and consent of the ministry of industry.

“Sometimes you will get people who are benefiting more than once because we simply have no line of sight on what is going on, on one side.”

Speaking on surviving the economic challenges of 2020, Osinbajo said that Buhari deserved the credit for providing steady leadership through the crisis.

He said, “Let me say on the whole that we have been able to weather the storm of a very, very serious economic challenge.

“I think that is based largely on the steady and stable leadership we received from the president. I think if Mr President had panicked in that period, we would have had a lot of difficulties, perhaps we would be in a much worse situation.

“He deserves the commendation for providing that steady hand when that was required.”

Osinbajo said anything was possible if Nigeria and Nigerians were willing to work together for the same objective.

However, experts who spoke to our correspondents offered different opinions.

A professor of capital market at the Nasarawa State University Keffi, Uche Uwaleke, said, the implications of devaluing the naira now were quite scary.

He said, “The first casualty will be the 2022 Appropriation Bill. It means the 2022 budget, which is predicated on N410.15 per dollar is dead on arrival.

“The Vice President obviously means well. But this statement is capable of triggering panic buying and speculation in the forex market (official and parallel) and further complicating things for the CBN.

“No doubt, devaluation will force down the volume of imports and reduce the pressure in the forex market temporarily. But have we thought of the impact it would have on pump price of fuel and the multiplier effects?

“How about the knock-on with regard to inflation and interest rates especially at a time when inflation rate remains elevated? Is high inflation rate not inimical to investments whether local or foreign?”

He said the argument that naira devaluation would incentivise foreign investors remained to be seen as other factors such as insecurity equally play a part.

The naira, he added, had suffered several devaluations in recent past.

He said, “It has neither solved the fundamental problem of helping to diversify the export base nor curbed unbridled imports. Doing so yet again will not change anything. Rather, it is a recipe for high poverty and unemployment levels.

“Again, suggesting that the CBN should discontinue its forex demand management strategy to the effect that certain items are excluded from accessing the official window has grave implications for exchange rate and the economy. If anything, it negates the import substitution drive of the present administration.

“The good news is that the CBN has sufficient external reserves to meet genuine demands for forex at the Investors and Exporters window. This much we have been told. The CBN should continue to manage it while joining hands with the fiscal authorities to create multiple sources of forex beyond oil.”

An economist and lecturer at the Lagos Business School, Dr Bongo Adi, said, “The exchange rate is a secondary indicator, driven by other economic factors. Vice President Yemi Osinbajo, with all due respect, displayed a lack of understanding of the economy.

“We need to ask why the naira is overvalued. It is simply because we have not been able to improve our export profile.

“We have not been exporting much, the only thing we export is oil. Even the volume of oil production and oil export has gone down in recent times. Without an enormous export profile, you may not have currency appreciation.

“We can say our export profile is not that big, and we keep borrowing money from outside. If you keep borrowing, your exchange rate will depreciate.

“The government has taken borrowing as a way of life, and this has made the naira devalue. When they say the market should drive the exchange rate, why shouldn’t the market drive the economic production and infrastructure in Nigeria?

“There is another angle which is the consistent depreciation of African currencies, not just the naira. If you compare the African currencies from Naira to the Cedis of Ghana to all of our currencies in Anglophone West Africa and Sub-Saharan African, you will see currency depreciation that has been known since the 1980s. Countries in Africa do not have control over their exchange rate.

On the other hand, a senior lecturer in economics at the Pan Altantic University, Olalekan Aworinde, supported the position of the Vice President on the revaluation of the naira to attract investors.

According to him, the value of the naira against the dollar is currently overvalued, thanks to the managed system adopted by the CBN to control the rate of the domestic currency.

“The naira as it is overvalued. Enough of this managed system whereby the CBN is trying to control the rate at which the naira is exchanged for the dollar.

“The VP is saying the truth because if we devalue the naira to its actual value, then the margins that the Bureau de Change relies on will no longer be there.

He said besides boosting the confidence of investors in the stability of the country’s economy, devaluing the naira would also drive increased exports.

“The disparity between the official rate and that of the parallel market is likely going to scare away investors because investors don’t want to go to a place that is full of uncertainty.

“If investors bring in funds and they can’t determine the actual worth of the funds, because of the discrepancies in the value of the exchange rate, so they choose to invest in other countries with unified or stable rates.

“Also if the exchange rate is devalued, we are likely going to see a situation where there is an improvement in the country’s balance of payment, in the sense that when we do this, imports become cheaper while exports become expensive.

“That way, we can bridge the trade deficit, as revenue from exports will be greater than what we spend on imports.”

The Founder of the Centre for the Promotion of Private Enterprise and economist, Dr Muda Yusuf, told our correspondent that it was inappropriate to say that the VP was calling for the devaluation of the Naira.

He said the VP implied that the currency should be market-reflective.

“What we are experiencing in the forex market is largely consequences of the CBN fixed exchange rate policy regime and administrative allocation of forex.

“The NAFEX window is a subsidised window and managing a subsidy regime is typically a herculean task. Suppressing the market is like swimming against the tide.

“The way out of the forex conundrum is for the CBN to allow the market to function. It is also imperative for the apex bank to de-emphasise demand management and focus on strategies to stimulate forex inflows.”

He added that a fixed exchange rate was a major disincentive to inflows and creates enormous pressure of demand for forex.