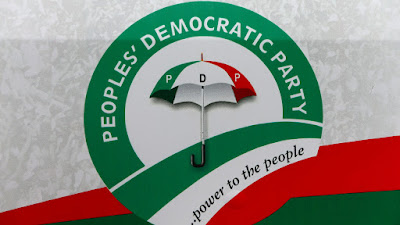 Peoples Democratic Party (PDP) has noted that the crisis in 20 state chapters of the All Progressives Congress (APC), where parallel congresses were held on Saturday to elect state officers of the party, is a clear signal for reasons why our nation is in a disaster.
The fractious congresses of the APC has shown how greed and lust for power by the APC leaders has created crisis in all facets of our national life.
The PDP described the APC congresses as a harvest of confusion in which APC leaders engaged in physical, verbal and emotional assault against another, while using their thugs to unleash mayhem on party members with charms and dangerous weapons.
It is indeed despicable that a party that has the incumbent President of the country could not successfully conduct state congress, as their leaders were seen behaving recklessly and investing heavily in violence; a development that speaks volumes on why our nation has been under the heavy yoke of violence, division, bloodletting and acts of terrorism under the APC watch.
The outcome of APC congresses in many of the states has shown that it is a party that lacks leadership direction and internal cohesion; a party of unruly people, who are averse to peace, which explains why our country is reeling in crisis under the APC.
The APC cannot guarantee or give unity, tranquility and progress to our nation. Instead, it has continued to worsen the tension in the country. It has continued to show itself as a party that is troubled from within and only waiting to implode at any time.
Nigerians should be wary of the APC. If the APC congresses turned out this bad one can only imagine the type of mayhem that would characterize its primaries as well as their involvement in the general election.
The APC state congresses present an unprecedented scenario in the history of our nation, where a party which produced the incumbent President, will have its ranks so torn down in shameful spectacle
Nigerians should make a correct interpretation of the signal sent out by APC congresses, which is that the ruling party is a mere contraption and an inchoate body of desperate elements. Such a party cannot organise for the genuine development of the country.
Moreover, our party, the PDP is not however unaware of the efforts by the APC to inject crisis into our congresses but we commend the deft handling of issues in all our congresses to avert a crisis situation plotted by the APC.
The PDP hereby calls on Nigerians to reject this crisis-ridden, conflict-provoking, and troubled political special purpose vehicle called APC.
It is clear that the APC cannot lead Nigeria to the promised land. It can only worsen the current uncertainty it has hitherto unleashed on Nigerians.
The PDP remains the umbrella party that symbolises the yearning of Nigerians for unity, development, and security. The PDP is refocused to rebuild our national fabrics, reunite our people and chart a way forward for sustainable development in our country.