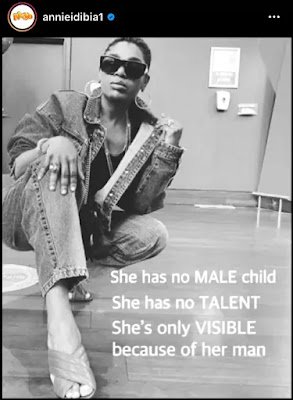 However, against the backdrop of recent events, her action set the social scene, media and entertainment circles afire.

Annie, the one half of power couple (Mr and Mrs Innocent “2Baba” Idibia) set every Idibia fanatic worried when she flung the doors opened over marital issues.

The couple weathered that storm, it seemed. But Nigerians, who love them were yet to recover when Brymo shook things up with a series of tweets that merged marital infidelity with fight for the throne of stardom.

Therefore, it was worth worrying when Annie’s 7.1 million followers couldn’t “see” her anymore.

But the Queen of Idibia Kingdom returned about two hours ago with tantalising images from her “Nkoyo” miniseries.

The latest post is the bang message: “She has no male child, she has no talent, she’s only visible because of her man,” she wrote; a direct jab at critics.

She had the message on a sassy white and black picture. At the last count, it had garnered over 18,000 likes and 850 comments and they are all ride-or-die with Mama Idibia.

Celebrities are there, too, praising her.