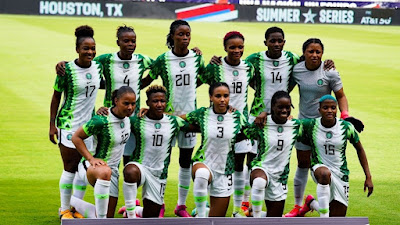 The winner of the maiden Aisha Buhari Invitational Women Football Tournament will emerge today when hosts, Super Falcons, meet Banyana Banyana of South Africa in the final game of the competition.

These are the current top two teams in Africa’s women football and today’s game is a continuation of a rival that dates back to the last African Women Nations Cup in Ghana, where Nigeria narrowly beat the South Africans to win the trophy.

According to Nigeria Football Federation (NFF), the match will kick off by 4.00 p.m. with Governor Babajide Sanwo-Olu of Lagos State expected to lead the political circle that would include other big-name players to the closing ceremony.

Ahead of the winner-takes-all encounter, the Super Falcons, Nigeria defeated Mali 2-0 in their first game, while South Africa was truly dominant and impressive in their 3-0 demolition of Ghana’s Black Queens.

A total of eight goals have now been scored in the tournament. Only Nigeria’s Gift Monday has scored more than one goal.

Yesterday, Ghana’s Black Queens defeated Indomitable Lionesses of Cameroun 2-0 defeat to ensure they left the tournament with a win, while the defeat ensured Cameroun did not earn any point or goal in the competition.