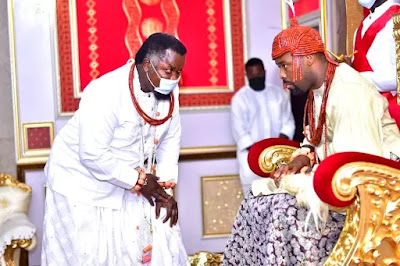 The Olu of Warri , Ogiame Atuwatse III has inaugurated the reconstituted Warri council of Chiefs with  an appeal to the  chiefs to avoid  temptation to misrepresent him on any issue.

“Do not misrepresent this kingdom. Do not say things in the name of the Olu he has not said. We are going to be a kingdom of laws,” he said.

“My hands as the Olu will never be tied. I will tell you the truth at all times “, he assured.

Urging the new Council with Chief Johnson Amatserunleghe as Chairman and Chief Eugene Ikomi, Secretary, to promote values of integrity that will showcase Warri kingdom in glowing light the monarch said he will not compromise on matters of the common good of Itsekiri nation.

“You will recall the Council of Chiefs was dissolved few weeks ago. And the revalidation of titles commenced after the dissolution. Having gone this far , it is proper to formally reconstitute the new Council of Chiefs “, he said.

“As we have said in our speech on the Coronation day, we really want to work with everybody. I don’t want to fight anybody. We will become a kingdom of laws, there will be code of conducts. When people come here, they will see dignity in the way as chiefs you carry yourselves.”, he said.

“As chiefs you are an extension of the Olu. You cannot be seen to be portraying the throne in a negative light “, he said.

Chairman of the newly reconstituted Council of Chiefs, the Iyatsere, Chief Amatserunleghe who spoke for the chiefs lauded the monarch for the reconstitution, promising that they will work with his vision for a greater Itsekiri nation.

The monarch also played host to several Itsekiri communities that came to pay homage. They include Ugbuwangwe, Ugbeogungun communities and so on.