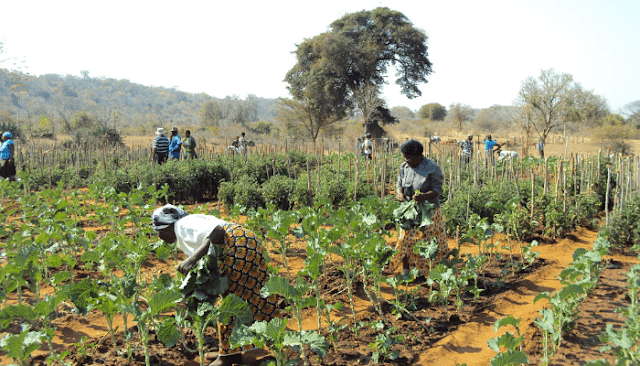 The Federal Government has expressed readiness to partner with farmers groups across the country to boost food production and agro-allied businesses.

George Akume, Minister of Special Duties and Intergovernmental Affairs has this indication during a meeting with the National Apex of Nigerian Farmers’ Cooperative Societies (NANFACOS) in his office in Abuja.

The National Farmers‘ Cooperative Apex is a statutory body established to, among others, complement the efforts of the Federal Government in the agricultural sector, particularly, in the areas of production, processing, marketing, and agro-allied services, as a value chain, which amount to adding value to various commodity value chains.

Akume said Nigeria is going to be number four by 2050 in terms of population in the world which has serious implications for food security but expressed hope that the country has all it takes to feed the rest of West Africa and beyond.

He said Nigeria needs a body like NANFACOS which is already playing a leading role in the area of the agricultural value chain to achieve the responsibility of feeding other African countries and assured the cooperatives of his commitment towards facilitating their meeting with President Muhamadu Buhari.

“Agriculture is the mainstay of many countries, particularly the developing world. There is something unique about agriculture, that is food security. One of the basic needs of man is food. It is the first need of man. If you don’t have food you can’t think well, you become sick and very unproductive. So food is the main need of man.

“Food also provided cash for us in those days in this country before the discovery of oil. Agriculture was the mainstay of Nigeria’s economy. You remember the groundnut pyramids in Kano, you remember cocoa in the western region, you remember palm oil in the Eastern region and we have beniseed, soya beans which earned the people a lot of money needed, maize, rice, ginger, so many, even fish abound in our waters”, Akume added.

In his remarks, Innocent Ifediaso Chukwuma, NANFACOS Board of Trustees Member, South East Zone and chairman/chief executive of Innoson Motor Manufacturing Company disclosed that a Tractor Manufacturing Plant his company was building at the University of Nigeria Nsukka would be commissioned this year.

Chukwuma said the plant was aimed at boosting agricultural mechanisation in the country and to make farming attractive to students of the University whom he said: “have opportunities to become great farmers but because of lack of interest, they move away”.

“We want to change the system of agriculture in this country. Our present government is so interested in agriculture. It has been spending a lot of money on agriculture. Sometimes, for those people that are doing the farming, the message doesn’t reach them. This time we will make sure that everybody will be interested in being a farmer because we want our country to be great”, he stated.

Earlier, Nwogwugwu Uzoma, president, NANFACOS said it was the Societies’ intention to partner with the Ministry of Special Duties and Intergovernmental Affairs for the overall far-reaching achievements of the goals of both organisations, particularly, in the agric-business venture as a private sector initiative.

“We are meant to anchor your ministry as the only one that deals meaningful with the private sector, and thus consider it as a vehicle that will carry us to various areas of our activities. I need to point out here, that if external support is not deliberately extended to us as a national farmer’s co-operative body, from a government agency like yours, there is a tendency that the independent farmer population (grass-root young and old, including women and youth) will cripple and suffer losses.

“There will be no hope for survival, nor the safety of farmers, which will bring about increased poverty situation, as well as the downward plunge of productive level in Nigeria, thus spelling disaster for the entire society, with food insecurity, occasioned by the general insecurity plaguing the nation presently. This, therefore, calls for your fatherly intervention for us to see Mr. President and thus stem the unpleasant trajectory. And this will be a plus to the achievements of your Ministry”, he stated.