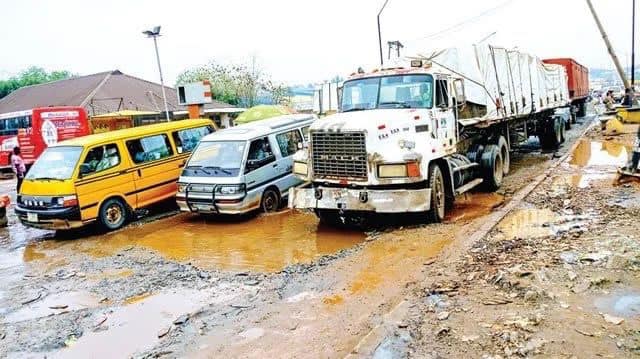 The Ogun State Government says the Federal Ministry of Works and Housing in collaboration with its ministry of Works and Infrastructure has finalised plans to embark on palliative work on critical sections on Sango-Ota-Idiroko Road, starting from Sango Under bridge to Ojuore.
The Chief Press Secretary to the state government, Kunle Somorin, said this in a statement on Tuesday.
Somorin said the Federal Controler of Works, Ogun State, Engr. Umar Bakare made this known while addressing newsmen shortly after inspection of critical sections on Sango-Ota-Idiroko Road and Lagos-Abeokuta road, on Monday.
Bakare said the 64km Sango-Ota-Idiroko has been put under consideration for reconstruction by the Federal Government under the FG’s Credit Scheme similar to the just awarded Sagamu-Papalanto-Obele road.
According to the statement, Bakare said that there is a synergy between the Federal Ministry of Works and Housing and the Ogun State Ministry of Works and Infrastructure to carry out the palliative work on the identified bad portions of the two important roads.
“According to him, as soon as work commences the failed portion between Sango and Iyana Ota, amounting to 1.2km will be prioritised, while the second phase will be the expanse of 4.7km between Iyana Ota and Iganmode Grammar School.
“This would be going on simultaneously with the efforts of Federal Road Maintenance Agency, FERMA, as the agency has also been mobilised to work on other parts of the long stretch.
“Also, the engineers assured that drainages would form an integral part of the reconstruction work to ensure that flood water does not destroy the road again.
“While acknowledging the plight of commuters on the roads, the Federal Controler of Works noted that the Federal Government was aware of the unpalatable situation and the government is working assiduously to ensure that the roads are fixed.
“While also pleading for the understanding of residents of Sango-Ota and its environs, he disclosed that Julius Berger, the contractor handling Lagos-Abeokuta Expressway is currently working on the Toll Gate Sango Bridge axis and the Tipper Garage section, adding the contractor will soon move to Itori/Lafarge/Papalanto section of the Lagos-Abeokuta Road.
Bakare further disclosed that the pavements of the critical sections under Sango Flyover bridge and Itori/Lafarge/Papalanto will be reconstructed as Rigid Pavement is to be put in place due to the peculiarity of the two sections of the road.
“He, however, appealed to the Ogun State Government to regulate the activities of traders along the road as they contribute to the traffic situation of the area.
“The Federal Controller of Works also requested that articulated vehicles be allowed to go on the Sango Flyover bridge to further decongest the road, declaring the flyover has the ability to withstand the weight of large trucks and trailers.
“Also speaking, the Ogun State Commissioner for Works and Infrastructure, Ade Akinsanya assured that palliative works will commence soonest along Sango-Idiroko Road, particularly from Sango Under bridge to Iyana Ota and Ojuore.
“Represented by the Permanent Secretary of the ministry, Engr. Lateef Yussuf, Akinsanya said that the state government has not folded its arms on the matter, adding efforts have been on to collaborate with the federal government with the view of finding lasting solution to the roads.
“While reiterating the Governor Abiodun-led administration’s commitment to make life more comfortable for the people and residents in the state, he assured that ministries and agencies responsible for traffic control and control of traders selling along the Lagos-Abeokuta road will be informed to do the needful.”