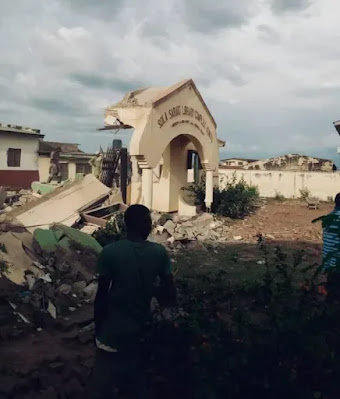 Former Senate President, Bukola Saraki, and his sister, Gbemisola, who is the Minister of State for Transportation, have kicked against the demolition of a library erected in honour of their late father, Olusola Saraki, a former Senate Majority Leader and strongman of Kwara politics.

The siblings wondered why the Kwara State Governor, Abdulrahman Abdulrazaq, continued to demolish properties linked to their father.

In a Facebook post on Tuesday, Bukola wrote, “Just got the news that the major official assignment carried out by the governor of my state, Kwara, today, is the demolition of an old public library named after my late dad, Dr. Olusola Saraki. May Almighty Allah continue to retain a place for Oloye in Aljannah Firdaus.”

In her own post on Facebook, Gbemisola, who is of the same political party as the governor, said such demolitions must stop.

She wrote, “Yet again, today we find that the Governor of Kwara State’s focus is not on building up Kwara, but on demolishing buildings which were owned or named after my late father, the Waziri of Ilorin.

“No matter how many structures are demolished, Baba Saraki’s legacy can never be destroyed, because it lives in the hearts and minds of the great people of Kwara. May Allah continue to guide and protect us all. Aamin.”

Last year, Abdulrazaq ordered the demolition of ‘Ile Arugbo’ — a building constructed by the late Saraki for the welfare of aged people in Ilorin.

The state government claimed that the land on which the building was erected originally belonged to a state clinic, adding that it was only reclaiming the property.

Apart from the Saraki family, the governor is also involved in a publicised feud with the Minister of Information and Culture, Lai Mohammed, who is also a member of the ruling All Progressives Congress.