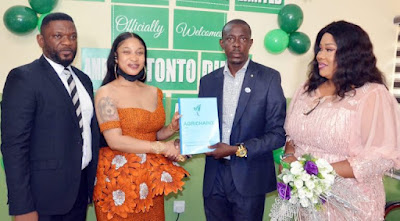 At an unveiling and MoU signing ceremony held in Abuja on Monday, the management of the company said that the actress would remain the face of its brand for the next one year.

Speaking at the event, the founder and Chief Executive Officer of Agrichainx, Dr Godfrey Akhayagboke, said that the choice of the celebrity was to show its commitment to the empowerment of the less privileged.

He said that the firm was privileged to have Dikeh.

“We are privileged to have her on board as our brand ambassador to support the growth of our economy and within the next few months, she will be helping us to promote Agrichainx.

“Agrichainx is an agricultural platform that was designed to connect farmers to the market, finance, tools and resources. To make agriculture simple and efficient for investors,” Akhayagboke said.

He said that the firm which had been in operation since 2018, had developed its native cryptocurrency called Agricoin.

He said that the coin had already been listed on various exchanges, adding that investors could easily convert their coins into any currency of choice.

“Agrichainx has registered users in 129 countries around the world, we have very active communities in 15 African countries.

“We have visited all the states in Nigeria educating and creating awareness about agriculture and blockchain.

“We have a lot in alleviating the plights of farmers throughout Africa,” he added.

On the position of the Nigerian government on the use of crypto currency, he hoped that the government will allow Nigerians to invest when it was still within their means to do so.

In her remarks after signing the agreement, the actress said that Agriculture was a sector that had been very dear to her heart.

She said that she had been passionate about making agriculture more attractive and sellable to her peer groups and others behind her.

“We talk about oil all the time and we neglect the richest resources that Africa ever had which is agriculture.

“I have a passion for agriculture, I am a farmer, I try to make farming attractive for my peer groups. I want more like me to go into farming because farming is the future,” she said.

Dikeh appealed to governments to increase the help giving to farmers in loans and access to tools, especially in rural areas.

She argued that the real farmers were in the grassroots, pointing out that they were the ones that needed such facilities the most.

Dikeh added that she was a livestock and plantation farmer.