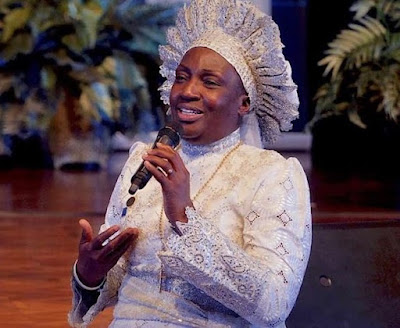 Prayerful woman of God, Rev. Mother Abimbola Esther Ajayi has confirmed that all is now set for the opening of the magnificent Love of Christ Generation Church (C&S) Cathedral in Lagos.
Located on Water Corporation Drive in Victoria Island, the imposing and unmistakable @love_of_christ_generation worship centre and multi-faceted facility will officially open at a glorious ceremony that will be attended by celebrated personalities from Nigeria and abroad such as Chief Olusegun Obasanjo, Pastor Enoch Adeboye and wife, Pastor (Mrs.) Folu, Ooni of Ife Oba Adeyeye Enitan Ogunwusi, Chief Rasak Okoya, Prince Samuel Adedoyin, His Eminence Dr. Solomon Adegboyega Alao, Rev. Pastor Mobiyina Oshoffa, Dr Samuel Ayokunle (President, Christian Association of Nigeria), Ovation Publisher, Bashorun Dele Momodu and Governor Babajide Sanwo-Olu.
Speaking at a media parley in Lagos, the anointed woman of God who was flanked by her husband, Rev (Dr.) Ademuyiwa Ajayi and Special Assistant (Media), Ms Olawunmi Ajayi said that she was delighted that after four years, the facility built by the construction giant, Cappa D'Alberto Plc, was ready for
use.
According to her "I am pleased to announce to you that on Sunday, September 5, 2021, the doors of this Cathedral where the glory of God shines will be opened.
And I invite everyone to come and celebrate the work of God.
She revealed that the project which began in 2017 was built to the highest standard and no corners were cut as all the relevant regulatory agencies were involved every step of the way.
In her words "If the creator of the universe sends you on a mission, the mission will be easy. We are very grateful to the Almighty for His grace and enablement.
She stated that the Cathedral will have a 4,000-seater Main Church Hall, 3,000-seater gallery, printing press, tailoring section, swimming pool, gym and a 3000-capacity event centre.
She also used the opportunity to thank Governor Babajide Sanwo-Olu and the media for the tremendous support that she has received over the years.