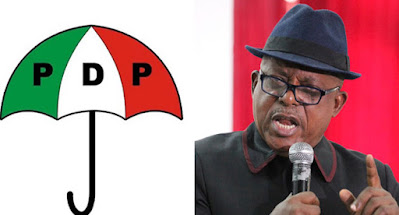 The meeting of the governors elected under the Peoples Democratic Party (PDP) called to resolve its raging leadership crisis has apparently hit a stalemate forcing the state chief executives to reconvene Tuesday.

The meeting was summoned to determine whether or not the National Chairman of the party, Prince Uche Secondus, should be removed from office as being demanded by the Rivers State Governor, Nyesom Wike-led pressure group in the party.

But after several hours of deliberation during which Secondus was later invited ostensibly to state his case, the meeting was adjourned till Tuesday to enable it to take a definite stand.

Chairman of the PDP Governors Forum (PDP-GF) and Governor of Sokoto State, Aminu Tambuwal, told waiting reporters that the meeting deliberated on current issues concerning the party but will reconvene Tuesday.

He assured that the governors are working to ensure that all disagreements are resolved.

The Sokoto Governor said: “We discussed extensively on matters of the moment concerning our party and we have collectively resolved to continue to work together in unity.

“This meeting will continue tomorrow (Tuesday) with other stakeholders.

“Very soon, Nigerians and indeed, all of you will hear our resolution but we are working towards resolving all issues, as a family. By the grace of God, we are going to achieve that.”

While the governors meeting was ongoing, nine of the 18-member PDP National Working Committee (NWC) met over the crisis and six of them voted for Secondus to leave office on the grounds of allegedly mismanaging the PDP.

An unsigned statement, which emerged after the meeting pointed out that those who wanted Secondus to quit believed that he is “highly incompetent, factionalised the party and has lost the confidence of members of the party.”

“The matter of his resignation was put to vote, 6 members voted that he should resign and 3 members abstained from voting, therefore the meeting resolved to forward the resolution taken on the 8th day of August to the governors forum, the BOT, the national assembly caucus of both house of reps and the senate.

“We call on all members of the party to remain calm as the party leadership is working tirelessly to resolve the leadership crisis.”

The statement revealed that those who voted in favour of ousting Secondus are Sen. Nazif, Mustapher, Udeh-Okoye, Arapaja, Orbih and Odefa while three members abstained.