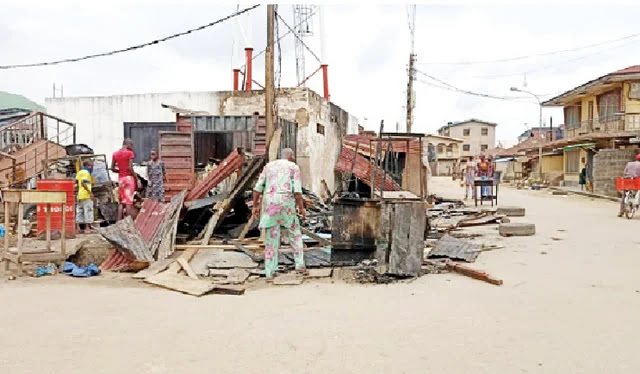 Residents of Ilupeju-Oshodi, in the Mushin Local Government Area of Lagos State, have lamented their losses after suspected cultists unleashed mayhem on the community on Monday and Tuesday.

PUNCH Metro learnt that no fewer than 30 vehicles were vandalised by the hoodlums on 12 streets in the area.

During a visit to the streets on Wednesday, our correspondent observed that the roads were deserted, as street gates and businesses were under lock and key.

Also, shards of glass from vandalised vehicles littered the ground.

A resident, who identified himself only as Balogun, said the fight was between Aiye and Eiye cultists.

He said, “The fight started on Monday and involved boys from Ilupeju and Ogunmokun. They broke my car windows. They destroyed more than 30 vehicles on the streets. The CDA reported at the Olosan Police Station and the police were here yesterday (Tuesday).”

A witness, Isatu Dawodu, said he saw the hoodlums breaking into stalls and stealing phones and other gadgets.

She said, “We saw the boys rushing into our street. They used an axe to destroy the gate and destroyed things on the street. They looted all the laptops and monitors in a betting shop opposite my house. They also burnt down a loaded foodstuff shop and five other shops. They vandalised up to 15 vehicles on my street alone. They destroyed my neighbour’s two Sienna vehicles. They came with guns, axes and other weapons. The government should come to our aid.”

A trader, who identified herself as Adijat Ibrahim, said her shop was looted after she fled for her life on Tuesday.

“When I returned to my shop, they had looted it and carted away goods. A lot of people have moved out of the area. This place used to be livelier than this,” she said.

The new Lagos State Police Public Relations Officer, Adekunle Ajisebutu, promised to send a statement to our correspondent on the incident.