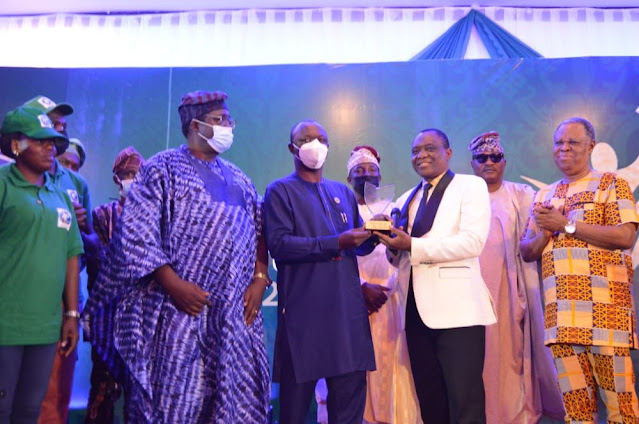 The Ogun State governor, Dapo Abiodun, has once again won the Governor of The Year Award in Agriculture.

The governor, who emerged tops in the 2020 edition of the award organised by the Nigeria Agricultural Award (NAA), was on Tuesday night, declared winner in the agric sector at the award ceremony of the Feed Nigeria Summit,  held at the Sheraton Hotel and Towers, Abuja.

Speaking after receiving the award, Abiodun noted that the Summit has become an international dialogue forum for the advancement of Global Agriculture, with sufficient reference to Agricultural development in Africa and Nigeria. 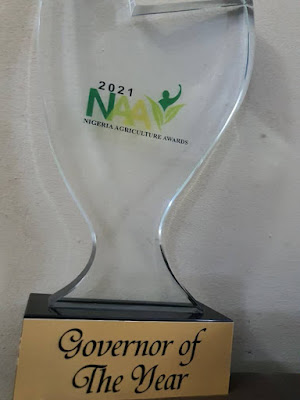 While appreciating the organisers of the event for the follow up on Ogun State agriculture despite its trademark low profile as well as quiet focus on delivery, the governor explained that the state's Agricultural Agenda has been tailored towards the Agricultural Agenda of the Federal Government of Nigeria, as being implemented by the Minister of Agriculture, Alhaji Sabo Nanano.

This agenda, according to him, has been focussed on Support to Smallholder Farmers, Job Creation, Food and Nutrition Security, Agricultural Industrialization and the Linkage of Growers/Farmers to the industrial process, in an innovative value chain approach.

Abiodun disclosed that Ogun currently has one of the highest numbers of beneficiaries in the CBN/Federal Government Anchor Borrowers Programme (ABP) in Cassava, and have been listed for other commodities.

He noted further that "through the FG's supports and interventions, Ogun has been able to cement our ranking as the largest hub for industries (including Agro-ventures) in Nigeria, the largest egg and broiler producer, largest producer and exporter of lemongrass oil, the largest hub for aquaculture in West Africa (according to FAO) and many others".

"In line with our resolve to partner with the private sector and provide enabling environment for investments and agribusinesses, we have become the world epicentre as a dependable host and partner, especially with the Government initiative of establishing the Cargo Airport to supplement the Special Agro-Industrial Processing Zone (SAPZ) of the African Development Bank (AfDB) and other donor-funded projects including the IFAD/FGN Value Chain Development Project (VCDP), in which our state has recorded tremendous success with 12,000 beneficiaries supported with technology, inputs and credit". Abiodun added.

The governor, who informed the gathering that the Cargo Airport will be delivered to Global Agricultural value chain actors and players next year, assured that "as a Government, we have a firm belief in inclusive Agricultural opportunities that will not cut out smallholder farmers, youths and women".

He explained further that the smallholder farmers had been deliberately empowered with knowledge and appropriate linkage that will enable them to take their share of the new wealth and opportunities in Ogun Agriculture, which has put them in the best position to supply services and raw materials to support the numerous Agro-Industries in Ogun State and beyond.

"The Ogun State Economic Transformation Project (OGSTEP) aimed at supporting 40,000 smallholder farmers and Nigeria COVID-19 Action Recovery and Economic Stimulus (N-CARES) are two major World Bank Projects that are fully operational in the State to support our Agricultural Agenda. The Agro-Processing, Agricultural Productivity Enhancement and Livelihood Improvement (APPEALS) Project is another World Bank project that is in view.

"Activities have also kicked off for the establishment of an Integrated Farm Estate, Garri Packaging Plant and a 200-Trainee Soil-Testing Programme, which are Federal Government Agricultural pilot programmes through the National Agricultural Land Development Authority (NALDA). We have signed a good number of MoUs with National and International Development Partners such as IITA, HarvestPlus and a host of other private sector partners on private sector-led initiatives, which has provided the necessary trust needed by investors.

"Our intervention in the Agriculture Sector, which started at the onset of the COVID-19 pandemic, was not hampered, as investments in upgrade of hitherto abandoned locations/facilities, enrolment of people that were displaced from other sectors into the Agriculture Sector, ensured that we did not starve, neither did we import food during the pandemic.

"The Planting Materials Palliative (PMP) that started at the onset of the pandemic, and which is continuous, targets 40,000 smallholder farmers. We also keyed into the Presidential Fertilizer Initiative that supplied fertilizer to target 10,000 farmers". Abiodun stated.

The governor, who announced the dedication of the award to the Federal Ministry of Agriculture and Rural Development and development partners, submitted that "Ogun will continue to partner with stakeholders to deliver the benefit of Jobs, Food and Nutrition, while sustaining Food Security and our edge in Agricultural Industrialization".