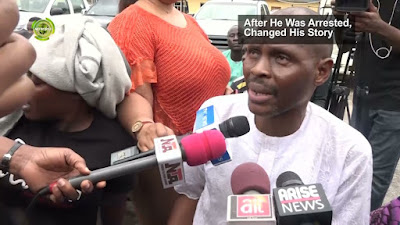 Tajudeen Bakare, one of the arrested protesters during the Yoruba Nation rally in Lagos, has been charged with murder.

Bakare, who identified himself as a chief of the Ogboni Fraternity, was charged by the police for the death of Jumoke Oyeleke, a sachet water seller killed by a stray bullet during the protest at the Ojota area of Lagos State on Saturday, July 3, 2021.

Ilana Omo Odua Worldwide, one of the organisers of the rally, said a total of 48 Yoruba Nation protesters arrested on Saturday 3 July, 2021 in Ojota, Lagos, have been arraigned before a Magistrate Court sitting in Yaba.

A spokesman for the group, Maxwell Adeleye, said the protesters were charged with unlawful assembly, unlawful society and conducts likely to cause a breach of public peace.

Adeleye disclosed that the bail granted to all the protesters was upheld by the court but that of Bakare was revoked.

He said the court has referred Bakare’s case to the Director of Public Prosecutor (DPP) for further advice.

Lagos State Police Commissioner Hakeem Odumosu warned the secessionist group to refrain from the planned rally, saying it poses a threat to peace in the state on Friday.

But Ilana Omo’Odua said there is no going back for the rally. They said they have written to Lagos State governor Babajide Sanwo-Olu and the police to provide security for the ‘peaceful’ agitators.

“We are not violent or killing anybody. All we just want is a country of our own where we can be protected and live peacefully without fear of our people being killed by armed Fulani herdsmen,” Sunday Igboho, who called for the rally said in one of his videos.

Igboho has been declared wanted by the Department of State Services. He is currently facing an extradition hearing in the Republic of Benin, where he fled after Nigerian authorities clamped down on his group.