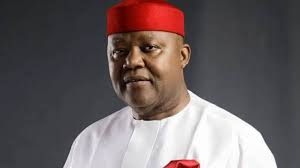 The Akachukwu Nwankpo campaign organisation has assured that the African Democratic Congress (ADC) candidate will ensure the emergence of a new branded Anambra which will manifest in the wellbeing of every family.

Media Head of the campaign, Ogbuefi Harris Chuma in a statement released yesterday in Awka said  the ADC candidate,  Akachukwu Nwankpo as an ex Seminarian has been called to reposition the state through his  ‘Anambra Families First’ vision.

He said that following the squabbles occasioned by lack of internal democracy in the different political parties the state,  Anambra people are daily embracing the ADC and Nwankpo’s Families First concept, which is making the coast become clearer for the ADC to emerge victorious in the election.

Chuma noted that with the Anambra Families First concept, the Nze Nwankpo-led ADC administration will put the family at the centre of everything that the government is doing.

“You ask yourself, this thing that I’m about to do, does it affect the family because it is the family that is the most important and discreet unit of the society. If that administrative society dies, everything dies. In our concept, we are going to address four fundamental pillars.

“The first area is the ability of the family to care for itself, the second area is the ability of the family to produce or provide either goods or services. If you look across the world, all the businesses that have done well across the world are family businesses. Businesses that start with family grow with family culture and stand to become a global brand or strength. It is very important for us to grow our families into specialities, into the things that they know how to run. So that families come with a product or service. Now, and when that happens, you will see that family tradition goes behind the brand and from generation to generation, they can grow.

“For me, a New Anambra will emerge as we will need to go back to promote family competency, family businesses, services and things that are branded around the family, then promote them to growth. The next thing is peace, security, and organised living in any society comes from the family.

For a man that Akpokuedike had prophesied will go places, the APGA Screening Committee’s disqualification was only creating a new path”, he said.