MURIC TO AFENIFERE : Apologise For Your Ill-Advised Comparison 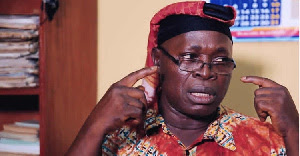 “Yoruba socio-cultural group, Afenifere, has compared Sunday Adeyemo, a.k.a. Igboho, to Prophet Muhammad. This is totally unacceptable. It is not only sacrilegious but outrageous and audacious. Afenifere has manifested categorical desertification of discernibility coupled with an alarming height of tramadol used hero-worshipping. It is provocative, preposterous, repugnant and nauseating.

“The circumstances surrounding the migration of Prophet Muhammad in 622 C.E. to Madinah differ a lot from those that sent Igboho to the Benin Republic in July 2021. Muhammad was invited to Madinah by the Madinese whereas Igboho was not invited by the people of Cotonou. Muhammad was a prophet of God, Igboho is not. Muhammad’s constituency is the whole world while Igboho’s activities are restricted to South-Western Nigeria.

“It was therefore an exercise in excessive exaggeration for Afenifere to have compared Igboho to a universal prophet whose followers in their billions spread across all the continents and countries of the world. This, to say the least, is an attempt to diminish the immense popularity of Prophet Muhammad, whittle down the influence of Islam on the world as a whole and trivialise the essence of the Abrahamic faiths.

“We remind the supporters and fans of Igboho to be wary of the antics of Afenifere. They should note that a thick fog of mystery still covers the travails of the great Chief Obafemi Awolowo and Alhaji Moshood Kashimowo Abiola. We are not sure that the hands of Afenifere are clean in both matters of these great sons of Oduduwa. They should not allow the same Afenifere to goad Igboho into oblivion.

Igboho is not to blame in this blasphemous matter. He never compared himself to any prophet. Therefore, MURIC has nothing against him. Our problem is Afenifere. People should not give labels that are above Igboho to him. Afenifere did not stop at comparing Igboho to Muhammad. It also compared him to Moses (Prophet Musa, peace be upon him). Moses was a prophet of God for crying out loud. But is Igboho a prophet?

“What does Afenifere want to turn Igboho to? Another prophet? Afenifere’s goal is to exert influence on Igboho and to gain total control of him. Afenifere should leave Igboho alone. It should stop playing politics with the young man’s life.

“If Afenifere is so desperate to compare Igboho to a great personality, the Yoruba socio-cultural group should pick any of the heroes of the Yoruba people. Or is Afenifere no longer proud of Yoruba heroes? We know that the Yoruba people parade a host of great men and women. Why not compare him to one of them? Why raise this young man to the clouds without any pillar to support his feet?

“Ogedengbe Agbogungboro of Ijeshaland, Timi Agbale Olofa Ina of Ede, Bashorun Ogunmola and Ibikunle of Ibadan, Sango and Gbonka in Oyo are all Yoruba heroes. Why couldn’t Afenifere pick one of them? None of them was armchair heroes. They were highly mobile, always on the move. Even the female among them, Moremi Ajasoro of Ile-Ife, (Olowo Aremo, Abowo gboogbo ti yo omo re lofin). Why did Afenifere look down on Yoruba heroes and bypassed them to pick a faraway prophet of God from Arabia? Is it inferiority complex?

“This is a bitter lesson for Yoruba Muslims who have swallowed the Yoruba nation propaganda hook, line and sinker. We told you before that Afenifere has no respect for Muslims. You have entered ‘one chance. They opposed our civil shariah, stigmatised our hijab and shunned our Islamic banking. Afenifere has never deemed it fit to intervene in any of the cases of persecution faced by Yoruba Muslims.

“Just as Yoruba Muslims are not given any special recognition in Yorubaland, just as their daughters, their wives and their mothers are treated with contempt and publicly humiliated in schools, hospitals and public offices, their prophet, the Seal of all prophets, the greatest man that ever lived, Muhammad the son of Abdullah, is now being denigrated.

“It is just a taste of the pudding. This is just a tiny fraction of what awaits Yoruba Muslims in an Oduduwa republic. MURIC calls on all Yoruba Muslims who are supporting the Yoruba nation agenda to retrace their steps with immediate effect if indeed they believe in Allah and in Prophet Muhammad as the last prophet. We will not follow those who deride our prophet.

“No true Muslim will do that. They know the eschatological consequences. Any Muslim who fails to withdraw his support for the Oduduwa Republic campaign after Afenifere insulted Prophet Muhammad will be held accountable by Allah yaom al-Qiyamah (on the Day of Judgement). This is not a fatwah. Rather, it is a fundamental teaching of Islam that Muslims must withdraw their support from those who malign their faith.

“We are aware that Sahara Reporters, the media house which published Afenifere’s blasphemous statement, has apologised. We take its apology in good faith. Sahara Reporters has shown respect for the sensibilities of Nigerian Muslims. It now behoves Afenifere to follow the footsteps of the media house by tendering its own apology. We will soon know whether or not Afenifere has any scintilla of respect for Yoruba Muslims, nay, Nigerian Muslims.

“In the interest of peaceful coexistence and mutual cooperation, and on behalf of the teeming population of Nigerian Muslims, we hereby demand an unreserved apology from Afenifere for denigrating the person of Prophet Muhammad whom Muslims throughout the world hold in high esteem.”