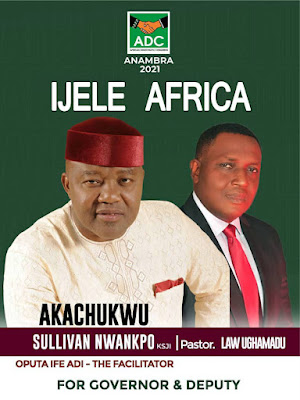 From the testimonies of eminent Nigerians and Anambra frontline citizens, the African Democratic Congress (ADC) gubernatorial candidate, Akachukwu Sullivan Nwankpo will be a Governor that all Ndi Anambra will be proud of.
"Nwankpo is a kindhearted man, humane, a good man. He will Go places, politically"- current Anambra Governor, Willie Obiano
"Akachukwu is super intelligent, and a good man" - Umeh
"Nwankpo, is eminently qualified to be the next governor of Anambra State"- Chief Ralph Nwosu
"Akachukwu is a servant leader, he gets things done without waiting to be served. He is a valuable governorship material" Peter Obi
These were some of the testimonies of eminent Nigerians; a morale boosting and the truth about the man that many believed will be a very good successor for Governor Willie Obiano of Anambra after the November 6 polls.
The African Democratic Congress (ADC) gubernatorial candidate, Akachukwu Sullivan Nwankpo, is generally regarded as the candidate of everybody, irrespective of class, age, gender, or creed, and the one to beat in the next election.
The Igbo political leader and peace-maker who served as the Special Advisor on Technical Matters to President Goodluck Jonathan and Secretary/Member of the Presidential Subsidy Reinvestment and Empowerment Program (SURE-P) Committee until 1 August 2013, who has been speaking about his programs and plans for a greater Anambra stated that nobody can afford to be indifferent in this election because the stakes are very high. Nwankpo will definitely deliver on his promises to ndi Anambra.
NAN-MEDIA