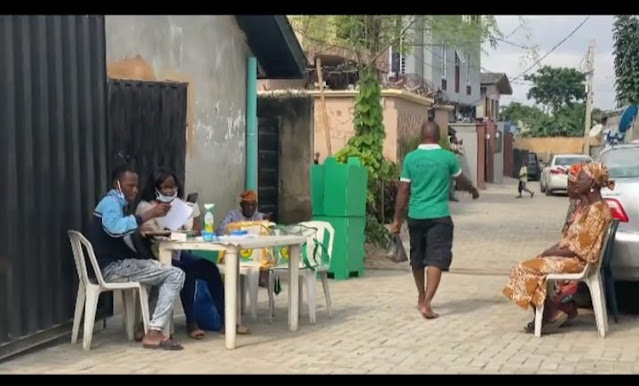 Low turnout of voters on Saturday marked the Local Government election in Lagos, reports the News Agency of Nigeria (NAN).

NAN reports that there was a low turnout of voters in many polling units visited in Badagry, Alimosho, Epe, Mushin, and Odi-Olowo Local Government Councils.

At the Awhajigoh Ward C in Badagry, the electoral officers, who arrived at 8. 20 a.m, wearing face masks and gloves, came with two bottles of sanitizers, urging the voters to observe the COVID-19 guidelines.

The officials of the Lagos State Independent Electoral Commission (LASIEC) arrived at the centre around 8.30 a.m, while election materials were delivered at about 9.05 a.m.

Baruwa explained that voters had started casting their votes but the card readers were have been functioning well.

“The card reader has not been working since the election started, so the LASEIC officials have resorted to using the voters' list to verify with the information on the voter card so that voters can vote,” he said.

The APC party representative expressed worry about the poor turnout of voters for the election.

“The turnout is poor and less impressive but since the election has just started, we are hopeful that the situation will improve before the end of the election,” he said.

Meanwhile, strong indications have emerged that the All Progressives Congress, APC, may win all the slots of the Saturday, Local Government elections to elect Chairmanship and vice-chairmanship, as well as councilorship officers into 20 Local Government Areas, LGAs, and 37 Local Council Development Areas, LCDAs, going by results from wards and council areas so far.

Though, the exercise, marred with apathy, hitches, and pockets of violence, was adjudged to be generally peaceful across the state.

Security apparatus were adequately deployed across the polling areas in the metropolis to ensure the safety of lives and property of citizens. They were seen moving in a convoy patrolling some areas.

LASIEC, had earlier stated that the results of the polls would be announced by the presiding officers at each polling unit, and subsequently, the final results will be announced by it after collations across councils.