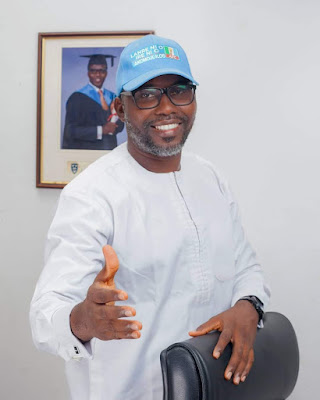 For being a strategic member of the team that successfully hosted the first-ever Progressives Youth Conference 2021, foremost Ogun State-born politician, Lanre Oyegbola Sodipo, fondly called LOS has been further rewarded by being appointed as a member of the South West committee of the National Youth Lobby Group set up by the All Progressive Congress (APC) National Youth Leader Barrister Ismaeel Ahmed.

It was learnt that the national leadership of the All Progressives Congress (APC) has authorised the party’s youth wing to set up zonal strategic lobby committees at the State and Ward levels, ahead of the 2023 general elections.

According to APC National Youth Leader Barrister Ismaeel Ahmed, adopting the recommendation by the party’s leadership led by the Caretaker Committee led by H.E Mai Mala Buni has rekindled the hopes of millions of progressive youths, who until now had been dispirited from participating in the party activities and holding elective leadership positions within the party especially at the grassroots level.

Barrister Ismaeel Ahmed added that this was critical to attracting the energy, commitment and brains of young people in running the affairs of the party and giving them a sense of ownership.

Ahmed said a National Youth Lobby Group had also been set up to meet with the party’s national leaders for effective delivery of the youth mandate.

The committees are to engage with Party Leaders, Governors, Legislators, Ministers, Elders and other critical stakeholders within their zones in ensuring that at least many party positions are manned by youths at the lower levels so as to attract the energy, commitment and brains of young people in running the affairs of the party and giving them a sense of ownership and therefore commitment.

In his acceptance note, LOS stated, “It’s a great honour to be so-called to serve my generation and party. Mine has been pushing the progressives’ ideals and mandate and that includes the mainstreaming of the younger generation and women”

“This is an attestation and a major call to do more for the country, for party and for a generation. The Future is a Decision, LOS concludes.