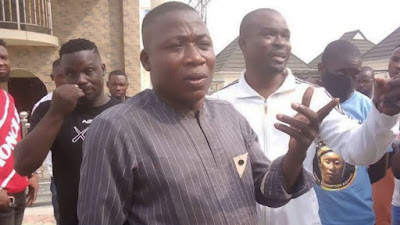 The Beninese lawyers representing  Sunday Igboho have sought the intervention of the German government to halt the planned extradition of the Yoruba nation activist.

This, it was gathered, was meant to put diplomatic pressure on Cotonou and foil the moves by the Federal Government to influence the Beninese government.

A member of Igboho’s legal team, Olajengbesi, disclosed this to one of our correspondents on Wednesday.

He said Yoruba activist’s lawyers in Nigeria would also dispatch a similar letter to the German Embassy in Abuja on Thursday (today).

Olajengbesi said the Beninese government would not succumb to pressure from the Federal Government to extradite Igboho to Nigeria, noting that “Benin Republic has a certain level of decency in terms of respect for the rule of law which is encouraging.”

He attributed the reported maltreatment of Sunday Igboho by security agencies in Benin to letters allegedly written by Buratai, who asked the government to arrest Igboho whom he accused of being a hardened criminal.

The lawyer added, “The government is treating Igboho like a criminal because of the letters written by retired Lt. Gen Tukur Buratai to the government in Benin describing Igboho as a hardcore criminal.

“We have communicated to the government in Benin that he is not a criminal but an advocate for justice in Nigeria and so, he must be given such due.”