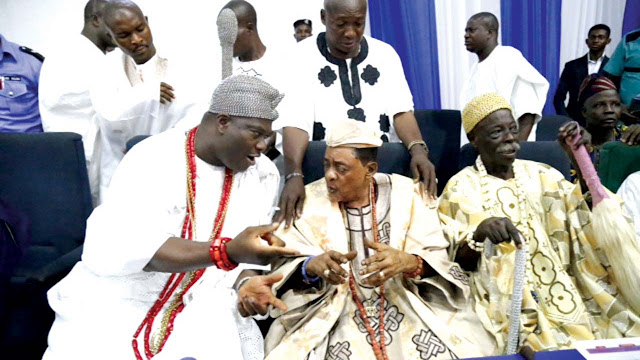 The Alaafin of Oyo, Oba Lamidi Adeyemi, on Friday, at the last minute, allegedly cancelled an appointment he gave to a Yoruba group, Ooni’s Caucus, on the alleged complaint that members of the group are “notorious critics” of the regime of the President, Major General Muhammadu Buhari (retd.).

The Ooni’s Caucus, which was inaugurated at the palace of the Ooni of Ife, Oba Adeyeye Ogunwusi, on July 20, 2021, is made of many influential Yoruba persons and is being coordinated by a former Managing Director of the News Agency of Nigeria, Mr Akin Osuntokun.

Saturday PUNCH learnt that Osuntokun led about 14 members of the group to Alaafin’s palace for the alleged 11am appointment on Friday, but after waiting for about two and a half hours, the influential monarch sent words to them that he would not be seeing them.

According to a source, who spoke to Saturday PUNCH on condition of anonymity, some of the group’s members who went to Alaafin’s palace with Osuntokun were a monarch, the Olugbon of Orile-Igbon, Oba Francis Alao; a former presidential spokesman, Dr Doyin Okupe; a former commissioner in Osun State, Muyiwa Ige;  a former Minister of Defence, Mrs Dupe Adelaja; a retired Deputy Inspector-General of Police, Taiwo Lakanu,  Oye Oyewumi, Sola Lawal, among others.

A former governor of Ogun State, Otunba Gbenga Daniel, is also said to be a member of Ooni’s Caucus, but he was not on the delegation to Alaafin’s palace on Friday.

The source, who is a member of the group, claimed that the group had through the Olugbon secured an appointment with Alaafin since Monday, and the same appointment was confirmed on Thursday, only for them to get to the palace and the Alaafin refused to see them on the claim that they were anti-Buhari and were also loyalists of former President Olusegun Obasanjo.

The source explained that the main purpose of the meeting was for the newly-inaugurated group to get Alaafin’s blessings and to possibly discuss the issue of the embattled Yoruba Nation agitator, Chief Sunday Adeyemo, alias Sunday Igboho, who is currently being held and tried in Cotonou, Benin Republic