A Quick Grasp Of Nwankpo's Antecedents By Shaba Gbenga 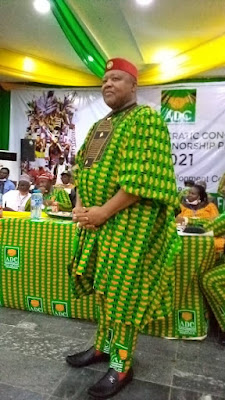 Before his emergence as the candidate of ADC in the state, Akachukwu  Sullivan Nwankpo has been arguing that in choosing a representative, the electorate must weigh all the options which include the contestants, their track record and ability, among other things before that all-important decision.

Nwankpo, therefore, called on everyone living in Anambra: indigenes, non-indigenes as well as all registered voters in the state to rally support for his candidacy as the governorship election approaches by urging them to get their voter's card ready and come out in his quest to fulfil his mantra of 'Anambra family first' mission a possibility.

Nevertheless, many people in Anambra State believe that Nwankpo is the candidate to beat, given his temperament, breeding, excellent education, good family name and interesting professional life, even though he has refused to flaunt these virtues.

A conflict resolution consultancy in Port Harcourt. Nwankpo worked with companies such as Royal Dutch Shell, Chevron Corporation, and Total S.A. in the Niger and developed third-party strategies for managing oilfield conflicts.

He co-authored the Peace and Security Strategy (PASS) for Shell Companies in Nigeria together with WAC Global Services. During this period, Nwankpo worked for the Government of Bayelsa State (2003–2007), where he developed the Bayelsa Partnership Initiative. From 1997 -1998, Nwankpo was a conflict resolution consultant to Yakubu Gowon Centre, where he played an active role in designing and implementing the Peace Initiative for the Ogoni-Shell Crisis.

Nwankpo is well experienced in conflict management, and strategic planning, which he will bring to bear as the governor of Anambra state.