July 26, 2018
The MKO Abiola Stadium, Abeokuta will on Thursday 26th July play host to the final matches for GTBank-Ogun state Principals Cup; the biggest grassroots soccer competition in West Africa. Now in its 6th year, this season’s final promises to be a thrilling encounter between the qualifying teams as they stake their claim to become ultimate champions of the prestigious tournament in the state. 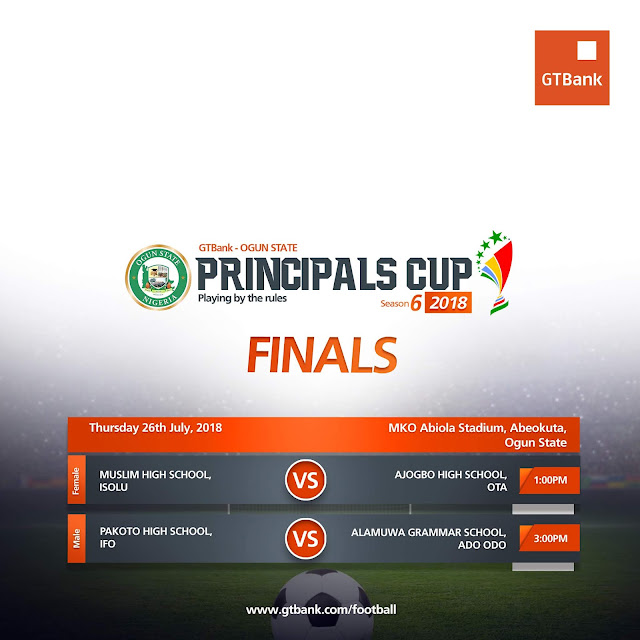 In the male’s category, Pakoto High School, which won the title in 2017 will be seeking to permanently retain the trophy as they go in search of their 3rd title. While Alamuwa Grammar School will also be gunning for victory, having eliminated Ijebu Ode Grammar School in a keenly contested semi-finals battle. The match is expected to be full of action and entertaining as both teams are relatively equal in strength, and technique.

The female fixture will be between Muslim High School, Isolu and Ajogbo High School whose fate was decided in penalty shootouts after a draw with formidable Our Lady of Apostles during the semi-final match.

Outstanding players to watch out for in the male category of this years final include Gbagadamosi Segun of Pakoto High School who is the leading scorer of the tournament and Popoola Sarat of Muslim High School, Isolu who in the female category won the most valuable player award in the semifinals. All eyes will also be on Owodunni Sofiat of Ajogbo Grammar School who displayed prowess that helped her team get to the finals.

For over six years, GTBank has sponsored the Principals Cup competition in Ogun state with the aim of promoting grassroots football, cultivating dreams through hard work and discipline. After the fixtures, winners will be rewarded with the sum of N1,000,000.00, N750,000.00, N500,000.00 and N250,000,00 for the 1st, 2nd, 3rd and 4th place winners respectively in both male and female categories.